OBODO: How I was kidnapped and rescued - MyJoyOnline.com

OBODO: How I was kidnapped and rescued 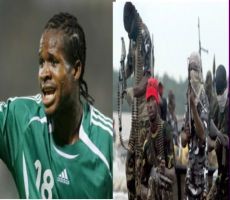 Udinese’s Christian Obodo has told of the terror that he faced when he was kidnapped at gunpoint in Warri and held hostage in the jungle.

The 28-year-old was on his way to church on Saturday when armed gunmen ‘took him away’, before then issuing a reported €150,000 ransom.

Initial reports of his release suggested that the ransom had been paid, but the player, who spent last season out on loan at Lecce, explained yesterday that he had in fact managed to escape.

“When I arrived at church I was taken by six masked men, we went on a three-hour journey and I then found myself in the jungle,” Obodo told Sky Sport 24 on Monday.

“I couldn’t see anything. They made me sit down and then they told me to ask my family for a ransom, so that nothing bad would happen to me.

“Three of them went off to withdraw the money, but in doing so they were captured. One stayed with me whilst another waited by a nearby phone.

“Seeing that the others did not return, they took me further out, always under the threat of their weapons, and they took the phone and called a girl.

“As soon as I heard the other side of the phone that said ‘kill Christian because the others have been arrested’ I decided to risk it, I pushed one of them and he fell into a ravine and I ran away.

“Then I asked for help and was recognised. Then the other accomplice was arrested. Whoever organised their capture is one of the many people I have to thank.”

In another account,this time in kickoffnigeria,Obodo revealed his kidnapp was an inside job.

“They said it was somebody close to me who set everything up. Someone that I have been helping. They said the person told them I would be in that church by 8am that morning. I couldn’t believe it. But they asked how they would know my movement to go and wait for me there. I didn’t know what to say.”

Despite the trauma, Obodo says he has no immediate plans to stop returning home to Warri: “It won’t stop me from going to Warri. That is where I have lived all my life. I’m a Warri boy and it’s not like I go out anyhow.

“Whenever I come home, I play football, three-a-side, in my compound with my friends, I don’t go out clubbing like I used to when I was much younger, so why should I stop coming?”

He did, however, admit that the experience will leave scars.

“When something like this happens, you learn a lot. It opened my eyes to a lot of things.”

The midfielder is now a guest of Delta State governor Emmanuel Uduaghan, who has now ordered round-the-clock security for him for the duration of the player’s vacation in Nigeria.

Obodo’s club in Iyaly,Udinese revealed that the player was rescued by the Police through his mobile phone signal.

A statement from Udinese read: “Thanks to his mobile phone signal, Obodo’s position was identified and the police were able to act to free him without needing to pay a ransom.”

The Nigeria international said after his release: “I thank God that I am free.”

Obodo, who played on loan at Lecce last season, has spent his entire career in Italy, having also played for Perugia, Fiorentina and Torino. He has won 21 caps for Nigeria.