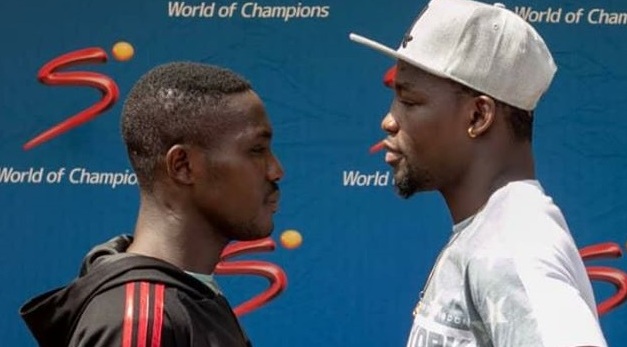 Independence Day, March 6, will be used to settle a boxing beef in Ghana’s lightweight championship between Michael ‘One Bullet’ Ansah and Sheriff ‘One Time’ Quaye at the Bukom Arena.

The hopeful final instalment of this trilogy is one of many major sporting events in Ghana, that was bitten by the Covid-19 ‘bug’ as organized sporting events were banned by Ghana’s President Nana Akufo-Addo in March 2020.

The bout, being put together by one of Ghana’s most consistent promoters, Alex Ntiamoah of Box Office Promotions, will be staged behind closed doors and so will every other fight night until further notice. As a result, fans will have to follow via television and online streaming.

This bitter sporting rivalry between the two boxers began in October 2018, when Sherrif Quaye recorded a split decision over Michael Ansah to annex the Ghanaian lightweight title. The latter’s fans believed their boxer got the better of his opponent and deserved the decision.

The second instalment of the bout staged on March 9, 2019, at the Bukom Boxing Arena provided the thrill and fireworks projected by pundits, with Michael Ansah recording a seventh-round TKO win over Quaye. Ansah was dominant on the night and subjected Quaye to a beating in the latter part of round six.

This bout which will determine who rules the lightweight division in Ghana is a big talking point amongst pundits and in communities with great interest.

“We are putting things together to ensure that the bout is enjoyed by fans. The current situation requires that we all adjust and I am very aware. We are making sure that we adjust well,” promoter Alex Ntiamoah told Joy Sports. Major announcements on how the content will be accessed by fans in Ghana and outside of it will be made soon.

Quaye – He was inactive throughout 2020 due to the limitations of Covid-19. However, after his loss to Michael Ansah, Quaye fought and defeated two journeymen in 2019. First was Joshua Owusu via a second round knockout. After that he saw off David Kotey in similar fashion.

Ansah – The revenge win against Quaye boosted his confidence a great deal. He knocked out Togo’s Fatou Sarouna in a contest and lost via a fourth round disqualification against Terry Flanagan in the UK. He returned to Ghana and successfully annexed the vacant national lightweight title after seeing off Benjamin Lamptey in a heavily subscribed bout at the Bukom Boxing Arena. Ansah was also inactive in 2020 for the same reasons.

Some pre- fight events are expected in the coming days.