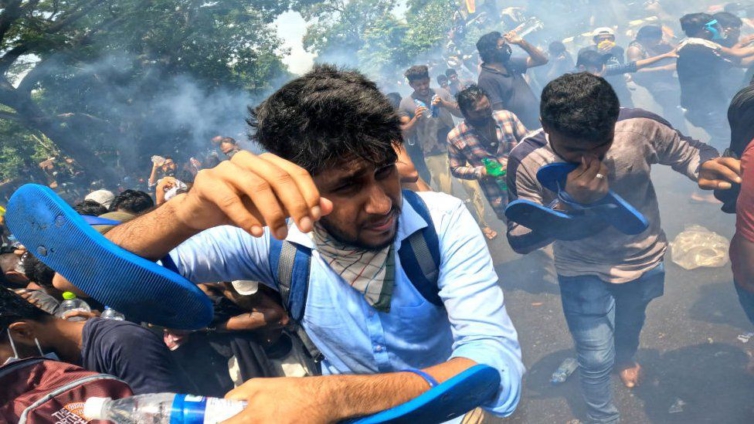 One person has died and 84 others injured after protests rocked the Sri Lankan capital of Colombo on Wednesday, hospital officials have said.

But the decision triggered further protests demanding that he also resign.

Hospital officials at the Colombo National Hospital said the injuries came from protesters who were outside the prime minister’s office as well as those who were outside parliament later in the evening.

Police had fired tear gas at protesters who attempted to break down the gates of the prime minister’s office in Colombo, before finally making their way in. They later made their way towards parliament.

A military spokesperson told the BBC said that a soldier and police officer were amongst the injured, and alleged that an assault rifle with ammunition had been stolen by a protester and had not yet been recovered.

Early on Thursday, Sri Lanka imposed a new curfew, which would be in place from 12:00 on Thursday till 05:00 on Friday, said the government in a statement.

The protests come as Sri Lanka has been suffering from its worst economic crisis in decades.

Many blame the Rajapaksa administration for the crisis and see Mr Wickremesinghe, who became prime minister in May, as part of the problem.

In a television address late on Wednesday, Mr Wickremesinghe had called on protesters to leave his occupied office and other state buildings and co-operate with authorities.

He also told the military to do “whatever is necessary” to restore order.

His statement came hours after Mr Rajapaksa had fled to the Maldives – days after his official residence was stormed.

Mr Rajapaksa had pledged to resign by Wednesday, but is still yet to submit a formal letter of resignation.

The leader, who has enjoyed immunity from prosecution as president, is believed to have wanted to flee abroad before stepping down to avoid the possibility of arrest by the new administration.

The president’s departure threatens a potential power vacuum in Sri Lanka, which needs a functioning government to help dig it out of financial ruin.

Politicians from other parties have been talking about forming a new unity government but there is no sign they are near agreement yet. It’s also not clear if the public will accept what they come up with.

In a press statement on Wednesday, Mr Wickremesinghe’s team said he had asked the speaker of parliament to nominate a new prime minister “who is acceptable to both the government and opposition”.

Earlier on Monday, the main opposition leader Sajith Premadasa told the BBC he would be tilting for the presidency. But he – like Mr Wickremesinghe – lacks public support. There is also deep public suspicion of politicians in general.

The protest movement which has brought Sri Lanka to the brink of change also does not have an obvious contender for the country’s leadership.

DISCLAIMER: The Views, Comments, Opinions, Contributions and Statements made by Readers and Contributors on this platform do not necessarily represent the views or policy of Multimedia Group Limited.
Tags:
Prime Minister
Ranil Wickremesinghe
Sri Lanka protest