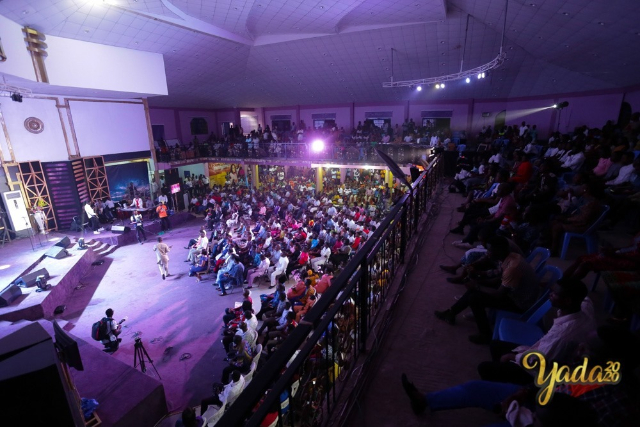 Usually, people would love to stay indoors in the evening after the Christmas and New Year festivity in Ghana because of the weather.

Harmattan, a period which kicks start from December to January in Ghana with a strong dry, dusty and cold wind, would naturally make most cities look like a curfew has been assigned.

But on the evening of the first Sunday of the ‘Dominion Year 2020’, it looked like no one really cared about the harmattan and its associated cold.

There was just one word flying in the whole of  Sekondi -Takoradi YADAH 2020.

I know you would be wondering what YADAH means and even those who were chanting it, they surely didn’t understand the word but what matters was they were going to give praise, dance and worship their maker.

Well, Wikipedia defines YADAH, as a Hebrew Verb with a root meaning “to throw”, or “the extended hand, to throw out the hand”; therefore, “to worship with extended hand”.

Eventually, YADAH came to denote songs of praise—to lift up the voice in thanksgiving—to tell forth and confess his greatness.

When you YADAH to music, you are worshipping the creator.

Well, I now understand why all roads in Ghana`s oil city led to the Breakthrough Family Ministry International auditorium.

Though the 2,500 capacity auditorium was filled by 6:30 pm, we could still count hundreds of people who were still marching in, indeed the Western Region was ready to  YADAH to begin the ‘Dominion Year’.

It was a night of music, dance, prayer and jubilation

The patrons were thrilled to the tunes of songs from the 2017 Artist of the Year Joe Mettle, Minister Charles and Larry of the Breakthrough Impact Choir, Min Mateo, Min Rachel among several others that led the audience into the throne room.

The event which happened at the Breakthrough Families Ministry International headquarters in Takoradi, was graced by renowned and celebrated men of God in the ‘Twin City’.

The one-time artiste of the year showed his worship prowess when he took his turn on stage, had the audience on their feet throughout the time he was on stage.

The songs he ministered on the night include the all-time favourite ‘Onwanwani’,  ‘Bononi’ and many others which kept the audience dancing throughout his performance.

Founder of Breakthrough Family Ministry International, Bishop Samuel Osei Tutu and host of YADAH 2020, in his exhortation to the patrons, said  YADAH has come to stay and it will be held on the first Sunday of every year so that people of the ‘Twin City’ can praise, worship and show appreciation to their creator.