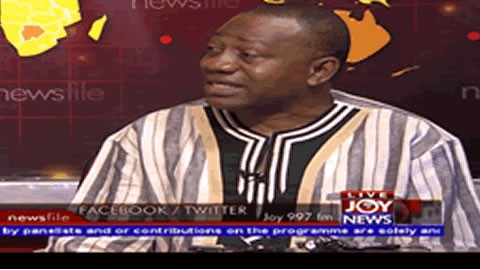 Minister designate at the Presidency, Abdul Rashi Pelpuo has defended Chairman of the Appointments Committee of Parliament, Ebo Barton Oduro over his decision to block members on the committee from asking questions in connection with payment of judgment debts.

Some members on the committee last Thursday made several attempts to seek the view of Madam Marietta Oppong, the nominee to the Ministry of Justice and Attorney-General, on the issue of judgment debts when she appeared before them, but Mr. Barton Oduro did not allow them.

His explanation was that the matter is before a competent court of jurisdiction and therefore making comments on it at that level, could impact on the hearing of the case.

The move attracted criticism from sections of the public and some committee members, who were unhappy at Mr. Barton Oduro’s decision.

Speaking Saturday on news analysis programme, Newsfile which was live on Joy FM and the Joy News on Multi TV, the Mr. Pelpuo maintained, “the Chairman was completely right” in taking that decision.

The Member of Parliament for Wa Central constituency, Upper West Region, said, “there was no way one could comment on the judgment debt issue without necessarily touching on the Woyome case which is in court.”

He rather suggested that if minority NPP members on the committee had not boycotted the vetting procedure, they could have compelled the Chairman to adopt a softer stand and allow the questions to stand.

However, leading NPP member Kwabena Agyei Agyapong said Mr. Barton Oduro may have adopted such a resolution because of his personal position on the “Woyome saga” while he was Deputy A-G, when the state paid Ghc 51 million to businessman Alfred Woyome as judgment debt.

The former Presidential Spokesperson said the “Chairman looked uncomfortable because he personalized the Woyome case at the initial stages”.

Listen to Mr. Rashid Pelpuo in the attached audio,