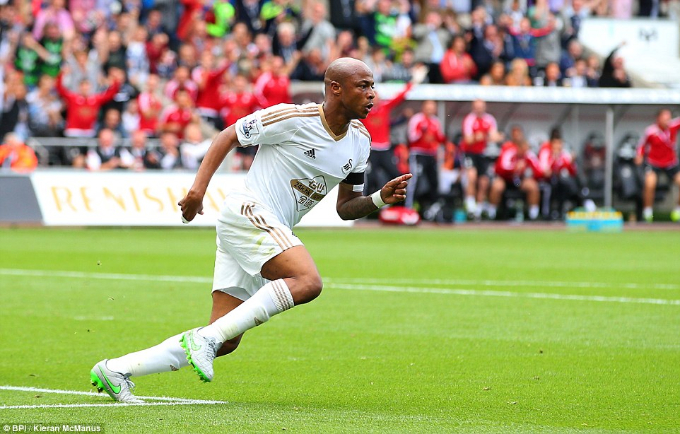 Andre Ayew scored his second goal for Swansea in as many games in a 2-0 victory against Newcastle on Saturday.

The Swans were in control of the game as Jonjo Shelvey set up Bafetimbi Gomis to put them ahead early on. Newcastle defender Daryl Janmaat was also sent off shortly before half-time after repeated fouls.

Jefferson Montero, who has been the toast of Swans since the season started, was on hand to cross for Andre Ayew to power a header home.

In fact, Swansea could have scored more but for two efforts thumping the woodwork.

Andre Ayew had a fantastic debut for Swansea as they picked up a point at the Stamford Bridge  a week ago Saturday. After that game, Garry Monk, team coach had special praise for the Ghanaian.

"He's come in and he's been incredible," Monk told reporters of the player, who arrived in Wales from Marseille on a free transfer

"He's worked extremely hard with the group, the group have worked hard with him to get him settled and it's always good for a new player when you come into a new league."

Ayew made the move from Marseille in a highly-publicized move that saw him become the Swans marquee signing. Below: Ayew and Montero