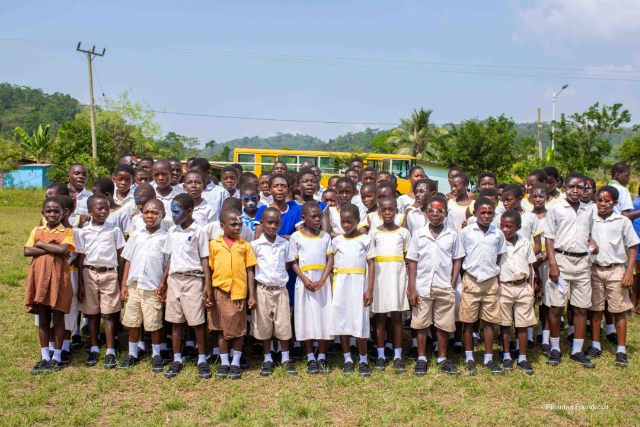 The Pinamaa Foundation, in partnership with the Springfield Group, has donated to 500 primary school pupils from five deprived schools in the Abuakwa South Municipality, in the Eastern Region.

Themed “A sole for a soul,” the donation exercise which is the maiden edition by the organisation seeks to support less deprive schools across the country.

Over 400 children each received a comfortable pair of shoes under the Springfield Group STEP project.

The Springfield Group has promised to take all necessary steps to provide all the children who were present but were unable to receive a pair of shoes with one in the immediate future.

The Springfield Group’s STEP project is an extraordinary project that seeks to provide 10,000 pupils in deprived areas with a comfortable pair of shoes for school.

Donating the items, Madam Danielle James of the Springfield Group explained that, “The vision behind the STEP project is to facilitate learning for 10,000 Ghanaian primary pupils.”

The team at the Pinamaa Foundation shares this vision and it is that unity of purpose that formed the basis for the partnership.

Executive Director of the Pinamaa Foundation, Phillipina Akyea. Stated that, “This was a Christmas party with a difference. In the spirit of the festive season, there was a lot to eat and drink. However, beyond that, we wanted to leave a more lasting impact.

“Education is undeniably a fundamental factor in nation-building and is the key to achieving success in our development efforts. These children live and school in some of the remotest parts of the Eastern Region. Almost all of them walk several miles to school yet most do not have proper footwear, which is why the S.T.E.P shoes are a blessing.”

She added, “We decided to provide the free eye screening in addition because we know that children with vision problems find it difficult to appreciate what is taught in class”.

‘….the team at Pinamaa believes that every citizen should support the education of the next generation. The children are our future. It is our hope that this program will be repeated in other regions of the country so more children benefit.”

Mrs Phillipina Akyea further urged individuals and corporate bodies to partner with the Pinamaa Foundation so as to improve the lives of the underprivileged and protect our youth.

All 500 children underwent a free eye examination and received free medication when necessary. The children were delighted to receive the numerous toys and school stationery that were distributed.

The children also participated in several games and sang along to Christmas songs as we served them with food, water and various drinks

The Foundation places a high premium on education and has undertaken similar projects such as donating over 1100 mathematical sets for all BEC.E candidates in the East Akim Municipality in March last year.

The Pinamaa Foundation also organizes seminars to educate teens and teen mothers on how to protect their sexual and reproductive health.

The Foundation has further assisted to reinstate drop out teen mothers back into society by empowering them with various skills such as hairdressing and sewing.