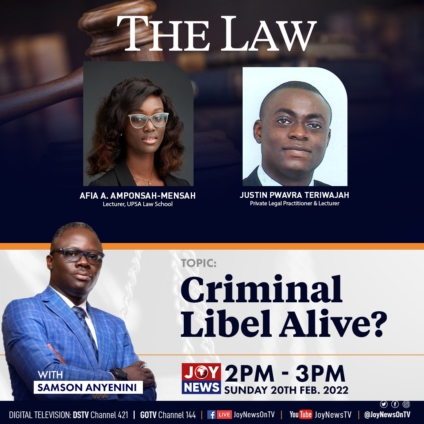 Today on JoyNews, The Law found out whether Criminal Libel; deliberate publication of defamatory lies which the publisher knows to be false, is still being applied in the country.

The conversation follows the arrest of three journalists and their subsequent prosecution by the Police for various alleged offenses.

Onua TV’s Morning Show host, Blessed Godsbrain Smart, was detained by National Security operatives after he had been granted bail by the court following his arrest over extortion.

He was detained along with another staff, Eric Dadzie Copperfield, popularly called DJ GH Boy who is also facing charges of abetment to extort.

Also, Accra FM’s Bobie Ansah, who accused First Lady, Rebecca Akufo-Addo of theft, was picked up by persons purported to be National Security operatives and has been charged with the publication of false news and offensive conduct.