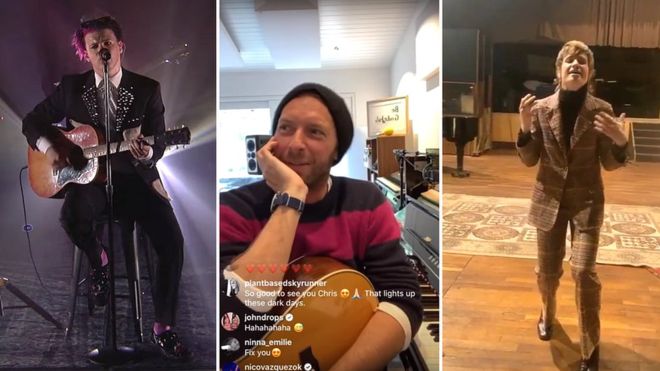 ngblud, Chris Martin and Christine & The Queens all put on makeshift live shows on Monday

Stars including Coldplay, Yungblud and Christine And The Queens are live-streaming gigs to combat the “boredom” of self-isolation due to coronavirus.

He referred to the film star as his “audience of one”.

Punk-pop singer Yungblud put on a more ambitious, hour-long show from LA, encouraging fans to mosh at home as he played to an empty room.

“Get on your bed, your kitchen table, your couch – and jump!” exclaimed the musician, staring down the barrel of a camera as he played the recent single Anarchist.

His concert was pulled together in just 72 hours, after his upcoming tour was postponed due to concerns about the spread of coronavirus.

The hour-long live-stream also included a cooking segment and a comedy drinking game featuring actress Bella Thorne and rapper Machine Gun Kelly (the beer they chose was, of course, Corona).

The star said he wanted to “give people a bit of positivity, laughter, and emotion” in the midst of the coronavirus epidemic, but it also helped him stay positive.

“Having the opportunity to connect with fans taken away from me wasn’t gonna be an option,” he told Vulture. “It’s a time to not give up and think out of the box – out of bad situations and despair comes incredible art, no matter what form that may be.”

Christine And The Queens is taking a similar approach, staging nightly live shows from the Ferber recording studio in Paris.

“Why not meet everyday at 6pm EST on my Instagram?” wrote the star in a message to fans. “I’ll find a way to deal with the ennui. Guests and weird concepts included.”

The first video in the series saw the singer perform an acoustic version of her current single, People I’ve Been Sad, followed around by a camera operator on a squeaky bicycle.

The idea has been picked up by theatres, too, with the cast of the West End improv show The Showstoppers broadcasting Tuesday’s performance live to Facebook, after the Lyric theatre was closed to audiences.

Pop star L Devine will honour every date of her postponed European tour with a live-stream from her house; while John Legend will follow Chris Martin’s example with an Instagram Live concert on Tuesday, organised by the World Health Organisation under the banner “Together, at Home”.

The shows will provide a much-needed creative outlet and sense of community for artists and fans alike; but they will not make up for the loss of income as the touring circuit effectively shuts down.

The venues that have closed include the Royal Albert Hall, which said the step would be “financially devastating”.

“Our doors are made to be open to the world and so it goes against everything in our nature to close them,” a statement said. “But these aren’t normal times and we find ourselves in the unique situation where closing our doors is the best way to look after the world.”

Last week, before the government recommended people should avoid “pubs, clubs, theatres and other such venues”, the Music Venue Trust reported a 27% downturn in attendance across the UK.

The Association of Independent Festivals also said ticket sales for its members were down 44% compared with the same point last year.

With many artists (not to mention their road crew) making their living from live shows, the financial impact of coronavirus could be severe. Some estimates suggest the live music industry will lose as much as $5bn during the outbreak.

Indie musician Frank Turner says he will turn a Facebook show into a fundraiser “to raise cash for my touring family, who are all tough financial straits in the current situation”.

Welsh folk band Calan took a different approach – selling personalised songs and members’ clothes to recoup the £5,000 they lost on a cancelled US tour.

Elsewhere, campaigns have been mounted to support smaller-scale artists by buying music and merchandise, or even funding them directly on sites like Patreon and Venmo.

And the Gigs Guide website has started a separate listings page for “virtual shows” to help promote artists who might be struggling.

In the House of Lords on Tuesday, questions were put to Baroness Barran, of the Department for Digital, Culture, Media and Sport, about the help the government would be giving to the arts and entertainment industry – where organisations have closed for safety reasons but are unable to claim on their insurance because the closure was not ordered directly by government.

Liberal Democrat Lord Clement Jones asked: “What consideration has been given to the ability of entertainment and hospitality companies to claim on their business interruption insurance policies where customers have been advised to stay away but no order for closure has been given.”

Baroness Barran answered: “The government understands that this has been an unprecedented time for these industries and that Covid-19 has indeed had a very profound impact.

“The statement from the Association of British Insurers has said the vast majority of businesses would not be covered for this type of interruption but the Secretary of State has this afternoon been having calls across the industry to make sure our lines of communication are open.”

Meanwhile, other artists are self-isolating after potentially being exposed to the virus.

Pop star Charli XCX said she found herself on lockdown just as she was putting the finishing touches to her new album.

“Being a workaholic in quarantine is quite stressful,” she wrote on Twitter. “Yes, I’m doing as much as I can at home – creating mood boards, planning out ideas for videos, thinking about lyric changes in new songs, re-recording vocals that could be better. But generally, even after one day – I’m feeling a bit purposeless.”

DJ and producer Diplo is also in self-imposed isolation after coming into contact “with hundreds of people in the past four weeks”.

He posted a heartbreaking video of himself at home, separated from his two young sons by a glass door, with the caption: “I wanted to build Legos and watch movies with them… But for now I’m just going to stay by the window and listen to them play drums and sing for me.

“This hurts because I miss them so much… but this is my sacrifice to make sure everyone around me is safe.”

My son's are too young to understand the complexities of what's happening. But they aren't anxious and nervous like the rest of us. They live in a house with their grandmother who is the most vulnerable. I have been in contact with hundreds of people in the past four weeks… And I'm staying away from the house until I am cleared of the virus. This hurts because I miss them so much they are what makes me wake up every day and live and breath, they are my ultimate joy, but this is my sacrifice to make sure everyone around me is safe.. I haven't had this much time home in years, and I wanted to build Legos and watch movies with them.. But for now im just going to stay by the window and listen to them play drums and sing for me .. Think about others in every decision you make in the coming weeks. This isn't A drill.. We already have enough news from Italy Iran Korea and China about the best ways to slow this.. We need to be smart, going out and interacting with groups is canceled, but kindess is not canceled, Love is not canceled, empathy is not canceled. Happiness is not canceled… Stay strong for the ones who can't right now