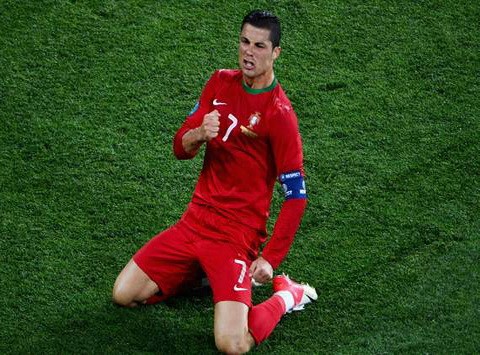 Cristiano Ronaldo missed training on Friday and will sit out Saturday’s friendly against Greece after complaining of muscular pain in his left thigh, coach Paulo Bento said on Friday.

World Cup Group G match against Germany, but added that he had to “consider every scenario.”

Ronaldo joined the Portugal squad on Thursday along with Real Madrid team mates Pepé and Fabio Coentrao and has yet to leave the team hotel in Obidos.

Portugal said in a statement he spent Friday doing rehabilitation work in the hotel because of pain in his left thigh.

“He will be with us but he will not compete,” Bento told reporters, adding that Pepé would also be rested. Bento was asked if there was any risk of Ronaldo missing the Germany match in Salvador on June 16th.

“I don’t think so but I have to consider every scenario,” he said. “What I don’t want to do is put any sort of pressure on a player that causes them to compete when they are not in a the right state to do so. “We’re not setting any deadlines.”

Ronaldo struggled with minor injuries during the closing weeks of Real Madrid’s season before playing 120 minutes in the Champions League final against Atletico Madrid last Saturday and scoring the final goal in their 4-1 win with a penalty.

“The fact that we have the best player in the way doesn’t make it an obligation for us to be world champions,” he said. “Our first target is to get to the round of 16.”

Ghana and United States are Portugal’s other group-stage opponents.