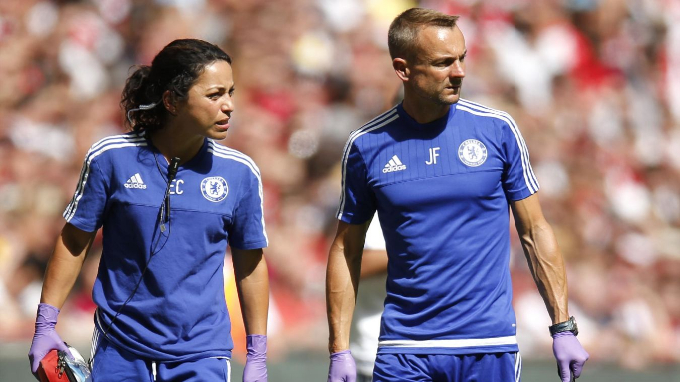 The Premier League Doctors' Group has expressed its concern over the ongoing situation with Chelsea medics Eva Carneiro and Jon Fearn and claimed any changing of their roles by Jose Mourinho would be unjust.

Towards the end of Saturday's stuttering 2-2 draw at home to Swansea, the reigning champions were temporarily reduced to nine men as Eden Hazard had to leave the field following treatment.

Chelsea boss Mourinho was visibly infuriated to see physio Fearn and doctor Carneiro run on to the field to give him that treatment, telling the media afterwards that their "impulsive and naive" decision showed they did not "understand the game".

Since then, Press Association Sport has learned Carneiro's role at Chelsea is changing significantly, meaning she will not be on the bench for this weekend's game at Manchester City, nor be involved in any future matches and training sessions.

That has been met with widespread criticism and in a statement the Premier League Doctors' Group has noted its unhappiness. In a statement carried by a number of national newspapers, the group said:

"Doctors working for Premier League teams and attending matches in a professional capacity are bound by the same professional and ethical boundaries as any other doctor practicing in the United Kingdom."

"The General Medical Council issue clear guidelines on good medical practice that need to be met in order for a doctor tmaintain a licence to practice and satisfy the criteria for professional revalidation every five years. Maintenance of the duty of care from the doctor to the patient is fundamental to these guidelines, even when the patient is a footballer playing in a Premier League game."

"The Premier League Doctor's Group considers that removing Dr Eva Carneiro from the Chelsea team bench for their next match is unjust in the extreme. In the publicised incident in last Saturday's game against Swansea, the Chelsea medical staff were clearly summoned on to the field of play by the match referee to attend to a player.

A refusal to run onto the pitch would have breached the duty of care required of the medical team to their patient. "It is a huge concern that Dr Carneiro has been subjected to unprecedented media scrutiny and a change in her professional role, merely because she adhered to her code of professional conduct and did her job properly. "Dr Carneiro has universal and total support from her medical colleagues at the Premier League Doctors Group.

It is also of great concern that at a time when the both the Premier League and the Premier League Doctors group are intensifying efforts to safeguard player welfare, the precedent set by this incident demonstrates that the medical care of players appears to be secondary to the result of the game."

Carneiro joined Chelsea in February 2009, having previously worked at the British Olympic Medical Institute and with England Women's Football and UK Athletics.

The doctor thanked people for their support on Sunday, posting on Facebook:

"I would like to thank the general public for their overwhelming support. Really very much appreciated." That status attracted in excess of 22,000 likes and on Tuesday it emerged Carneiro's role was changing, albeit while keeping the title as Chelsea's first-team doctor. When approached by Press Association Sport on the issue, a club spokesman said:

Mourinho has made no comment on the issue so far, but is expected to hold his pre-Manchester City media conference on Friday.