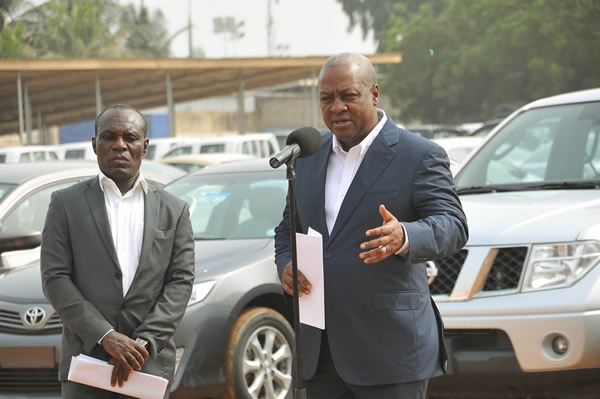 The presentation of the vehicles, including saloon cars, pick-ups and buses, follows concerns raised about the adverse effects inadequate vehicles were having on the operations of the agencies.

The National Security Council Secretariat received 26 of the vehicles, while the Bureau of National Investigations had 58 vehicles and 30 motorbikes.

According to President Mahama, the Prisons Service was considered in view of the urgent need to address its mobility deficiency that had led to situations where prisoners were conveyed in commercial vehicles.

Tuesday's presentation, he explained, constituted the first phase of the allocations, adding that the second phase would benefit other security agencies, including the Ghana Armed Forces, Police and Fire Services.

Prior to the presentation, President Mahama inspected operations at the newly-built Ghana Emergency Command Centre at the premises of the National Security Secretariat.

At the centre, the President witnessed the surveillance system monitoring various locations in the capital, including traffic intersections, busy streets and installations, through the use of intelligence cameras that feed the system at the centre.

The centre, which is acting as an emergency call centre to alert the security agencies of emergencies to ensure rapid response, is currently using Accra for its pilot operations, after which the surveillance would be extended nationwide.