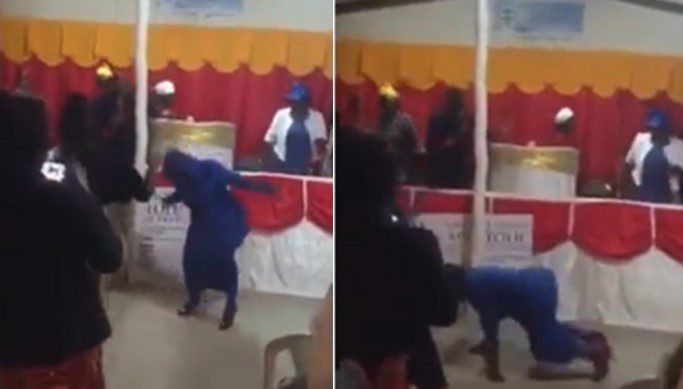 A Nigerian prophetess chased the Holy Spirit out of her church when she paused preaching to deliver hot twerk.

Popularly known as Mummy G O, the controversial prophetess was captured in the viral video jamming to a Reggae track to the admiration of her congregation.

When the song’s rhythm hit her, she went in a position, standing on both hands and knees and shook her backside vigorously to the beat.

All eyes were on her as she twerked for some seconds.

MUMMY G O this is the only dance that can take you to heaven. 😒😒😒 pic.twitter.com/QtlZHkI28N

Jubilation took over the auditorium from the congregation, who had just witnessed the real self of their prophetess, but the reaction of Mummy G O’s colleagues was that of disapproval.

Netizens have reacted, calling Mummy G O out for her double standards since she is known for always identifying categories of persons who won’t make Heaven.

Mummy G O had once held a sermon, preaching that people with big foreheads, those who use lipsticks and perfumes, as well as ladies who wear trousers, have been exempted from the race to heavenly.

Per her preaching, the journey of heaven would be a battle for many, while others have been disqualified from birth.