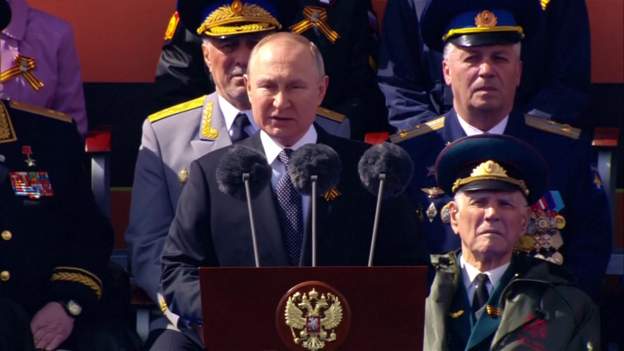 He says the invasion of Ukraine – what he called a “special military operation” – was necessary and had been provoked by the West.

The Russian president was leading anniversary celebrations in Moscow of the Soviet Union’s victory over Nazi Germany in 1945.

Victory Day in Russia – an annual commemoration – is the country’s most important holiday and a source of national pride, marked by a huge parade of soldiers and military hardware through Red Square.

But the backdrop of this year’s spectacle of tanks, planes, rockets and missiles is different.

Russian soldiers are fighting in Ukraine – one of the deadliest conflicts in Europe since the Second World War, which Mr Putin has described as a “special military operation”.

Intense attacks from Russian forces continue across the war-ravaged country, with ordinary Russians being told they are once again fighting against “Nazism”.

Then-President Putin took centre stage and told his armed forces they were fighting for their country now.

“You are fighting for our people in Donbas, for the security of our motherland,” he said.

However, he did not take the opportunity to officially declare war or further mobilise the Russian military.