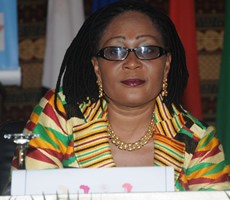 Some Queen Mothers in the Brong-Ahafo Region believed to have been sponsored by the First Lady, Lordina Mahama, for the second time running, demonstrated against her sup­posed detractors.

This time they cursed for­mer General Secretary of the NPP, Kwadwo Owusu Afriyie alias Sir John, and two other New Patriotic Party (NPP) Members of Parliament (MPs) for linking the First Lady to the microfinance scam that has robbed many customers of their investments.

Clad in red and black outfits with bottles of Schnapps in their hands, they invoked curses on their targets for dragging the first lady and her husband into the fraud visited on the residents by the collapsed microfi­nance operators.

Drawn from all over the region, the queen mothers poured libation, chanted and called on their gods to kill Sir John or anybody who would speak against the first lady or try to link her to the troubled microfinance company, DKM.

Even though the women claimed that they were angry, the programme was said to have been coordinated by the regional branch of the National Democratic Congress (NDC) and the district administration where a piece of cloth, costing â‚µ100,000, was allegedly given to each of them.

Daily Guide gathered that the first press conference held a fortnight ago did not make the needed impact and so the traditional rulers decided to organise it again.

The MCE for Kintampo, Justice Baffoe, and the NDC regional women's organiser were reportedly the coordinators of the programme, with the participants heavily induced with cash and goodies.

Before the commencement of the press briefing, a supposed linguist of the queen mother of Sunyani, Akua Manu, poured libation to the gods saying their eyes were red because one of their own, the first lady – who is also Sumpahemaa of Nkoranza – was being accused wrongly of having links with DKM Microfinance and so called on the gods to deal ruthlessly with anyone who would tarnish the image of the first lady.

According to Kumi, Mrs Lordina Mahama did not know anything about DKM but rather wanted to help people get their lost investments but people would not appreciate her efforts.

She accused Sir John of going on radio to say that they (queen mothers of B/ A) did not have any business doing that was why they were fol­lowing the first lady.-

Nana Akosua Kumi Yeboah asked Sir John to go back to the same radio station on which he made the state­ment, retract it and apologise to them, otherwise the women folk would use their menses to curse him.