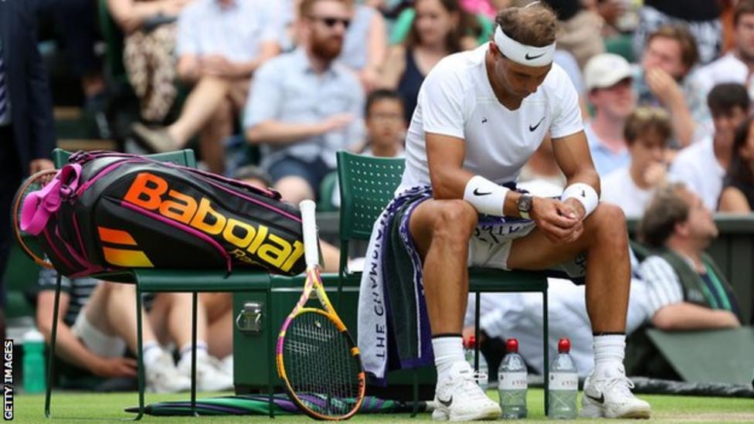 Rafael Nadal had a medical timeout and struggled with his serve in his quarter-final victory. Photo by Getty Images

Rafael Nadal has withdrawn from his Wimbledon semi-final against Nick Kyrgios with an abdominal injury.

The Spanish second seed received treatment on the injury during his quarter-final against Taylor Fritz on Wednesday but pushed through the pain to win in five sets.

“I have tried a lot of times in my career to keep going but it is obvious the injury will get worse,” he said.

Nadal confirmed he has a tear in his abdominal muscle which meant he would not be able to be competitive over two matches.

The Spaniard had practised at Wimbledon away from the media earlier on Thursday.

Nadal had strapping on his abdomen during his fourth-round match but was in visible pain from the injury against Fritz.

He took a medical time-out during the match and ignored calls from his dad and sister to quit before somehow rallying to win.

His serve was noticeably affected by the injury and he was downcast during his post-match media commitments.

The 36-year-old was a doubt for Wimbledon in general because of a chronic foot condition.