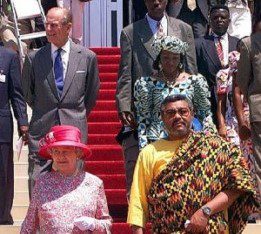 According to Mr. Amidu, the late former President exhibited the highest degree of integrity and honour in the management of the country’s public affairs for the common good of its ordinary citizens.

In his eulogy to the former President on the first anniversary of his death, the former Attorney-General stated that, “In terms of management skills in all facets of our governance as Head of State, including an in-depth understanding of the statecraft of our national and international relations, the life of the late President Emeritus Flt. Lt. Jerry John Rawling s compares in our circumstances only to the late statesman and British Prime Minister, Sir Winston Churchill, who also did not have all those highfalutin certificates or university or college degrees,” he said.

Locally, he said no other Ghanaian President can compare to former President Jerry John Rawlings’ exhibition of the highest degree of integrity and honour, except Dr Kwame Nkrumah.

He added, “It will take this country a long time for another President who understands the ordinary Ghanaian psyche and empathises truly with his compatriots to emerge to salvage our decaying democratic situation under the Constitution.”

Meanwhile, the former Special Prosecutor mentioned that despite the tremendous and many exploits of the late former President in his pursuit of accountability and probity, he was also human thus had faults of his own.

“He naturally had human weaknesses, and some of the actions taken under his leadership to restore the sanity and dignity of our decadent political system may have hurt others, and sometimes fatally,” he said.

He’s, however, convinced that despite his weaknesses and faults, his exploits overwhelmingly prevail.

“The facts are evidentially demonstrated by the extent to which those who had exhibited disdain to his regimes when he was in office as Ghana’s Head of State turned round to opportunistically assimilate and integrate his personality and successes into their regimes,” he said.

The 73-year-old is said to have died after he contracted Covid-19 and was rushed to the intensive care unit of the Korle-Bu Teaching Hospital in Accra.

Announcing his passing President Akufo-Addo said, “It is with great sadness that I announce to the nation that the first President of the Fourth Republic, Jerry John Rawlings has joined his ancestors.”

DISCLAIMER: The Views, Comments, Opinions, Contributions and Statements made by Readers and Contributors on this platform do not necessarily represent the views or policy of Multimedia Group Limited.
Tags:
Flt. Lt. Jerry John Rawlings
Martin Amidu
Sir Winston Churchill