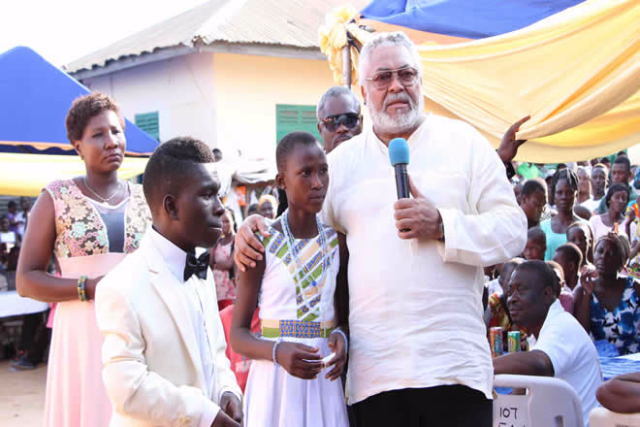 Former President, Flt lt Jerry John Rawlings and the chiefs and people of Vume in the Volta Region have celebrated the successful treatment of two young people from the community who have undergone life-saving surgery.

The well attended durbar held on Sunday, August 27, 2017 saw the former President and families of the two young persons praise Prof Emeritus Boachie Adjei and his team at the Focos Orthopaedic Hospital for the life-saving correction of the spinal deformity of Maxwell Agorsor as well as the heart surgery of Naomi Gomeshie at the Korle Bu Teaching Hospital.

Flt Lt Rawlings who was instrumental in raising funding for the important operations used the occasion to express his gratitude to health workers in general for the important services they render to the society.

The former president recollected how his attention was drawn to a young child who was increasingly breathless. He could see the pulsations of her heart through the dress the child wore. Amidst the difficulties, the former president stated that he was inspired by the steep determination and fearlessness that the rosary wearing girl displayed.

The former president sought the assistance of other philanthropists to enable the girl undergo a successful heart surgery at the cardiothoracic unit of the Korle Bu Teaching Hospital.

Around the same time, his attention was drawn to another child who had a severe spinal deformity. Enquiries at the time revealed that the intervention would cost a whopping sum when done in the United States of America.

Several attempts made to assist the young man proved futile until early 2017 when Prof Boachie Adjei called on the former President to introduce his philanthropic organization; the FOCOS orthopaedic hospital and also to ask for his assistance to raise funds to support under privileged children across Africa who have similar spinal deformities.

President Rawlings visited Maxwell at the Focos Hospital before his surgery

Former President told the ecstatic crowd that he was overcome by joy when he met the young man with a severely curved back, standing upright for the first time in his life after the successful surgery. He, therefore, decided to host a community durbar to honour Prof Boachie Adjei and his team and to also afford them the opportunity to share in the joy of the whole community.

The chief of Vume, Togbui Banahene who chaired the occasion thanked the former president and the medical personnel for the humanitarian gesture. He mentioned that the former president who resides in their village continues to demonstrate his affection to his people especially when they are in need.

In attendance were the three members of parliament for the Tongu area namely Kobby Woyome, Alexander Hottordze and Samuel Ablakwa Okudzeto, Regional Director of Health Services, Dr. Joseph Teye Nuertey, District Directors of Health Services and a host of other distinguished guests.