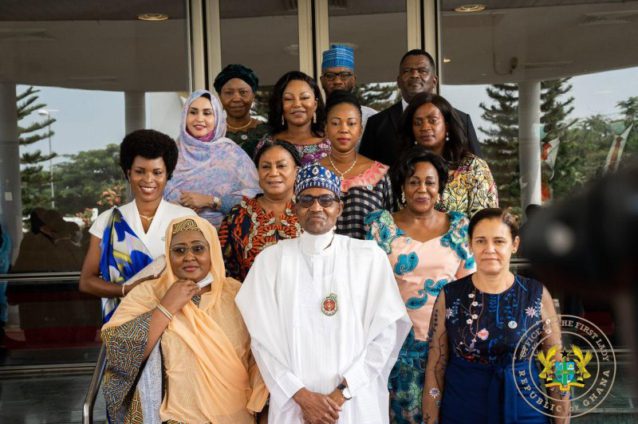 The summit is being hosted by Mrs Aisha Buhari, First Lady of Nigeria, acting President of AFLPM, and it is aimed at finding measures to mitigate violent conflicts on the continent and minimize the negative impact on the people, especially women and children.

The AFLPM was established as an outcome of the September 1995 Fourth World Conference in Beijing, China on women.

This was a forum where a significant initiative was taken to establish the African First Ladies Peace Mission by wives of African Heads of State/Presidents who came together as ambassadors of peace during the conference.

The idea of the Peace Mission, therefore, arose from the need to provide succour to the helpless in crisis situations in Africa, especially women, known to be the most vulnerable, and bear the greatest burden of violent conflicts, as they are usually defenceless, left with orphans, made slaves in war zones, often at the mercy of rampaging rebels, and insurgents.

These women are ultimately left to nurse the wounded and contend with the resulting poverty.

The coalition of AFLPM represents a critical stakeholder that could contribute to the mitigation of violent conflicts and minimize the negative impact on the people, especially women and children of Africa.

The AFLPM, has subsequently rendered support to women and children, as well as made a lot of contributions in fostering peace on the continent, in advocacy matters concerning the rights and protection of women, children, and the girl child from violence.

Mrs Buhari who started receiving some of her counterparts ahead of Summit on Sunday, November 21, expressed delight for the visit.

Other first ladies from Liberia, Niger, and Namibia among other representatives of Zimbabwe, and Cote d’Ivoire are in attendance.

Ms Aliyu Abdullahi, the Special Assistant on Media to the Nigerian first lady, has described the mission of the AFLPM as promoting peace and conflict resolution across Africa.

DISCLAIMER: The Views, Comments, Opinions, Contributions and Statements made by Readers and Contributors on this platform do not necessarily represent the views or policy of Multimedia Group Limited.
Tags:
Abuja
African First Ladies Peace Mission
Peace Mission Summit
Rebecca Akufo-Addo