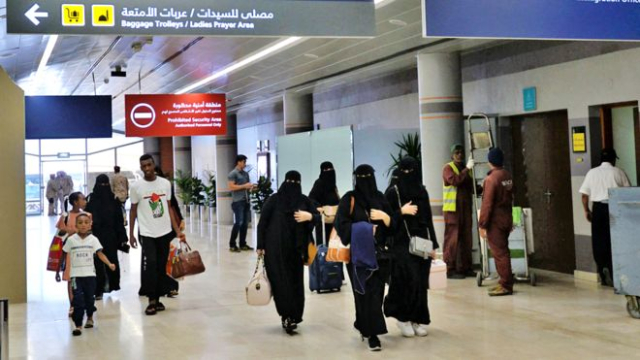 The new rule announced on Friday allows women over the age of 21 to apply for a passport without authorisation, putting them on an equal footing to men.

Women are also being given the right to register births, marriage or divorce.

The kingdom has recently eased other long-standing social restrictions on women, though campaigners say more remains to be done for women’s rights.

Saudi Arabia has increasingly come under the spotlight over its treatment of its female citizens, an issue highlighted by several high-profile cases of Saudi women seeking asylum abroad.

The de facto leader, Crown Prince Mohammed bin Salman, has sought to relax prohibitions on women, including lifting a driving ban last year, in a bid to open up the conservative kingdom.

But he has also cracked down on women’s rights activists, putting a number of them on trial in recent months.

Until now, this has meant women there were required to seek those relatives’ permission to obtain or renew a passport and exit the country.

But the royal decrees published in the kingdom’s official weekly Um al-Qura gazette on Friday stipulate that Saudi passports should be issued to any citizen who applies for it, and that anyone over the age of 21 does not need permission to travel.

The changes allow women for the first time to register their children’s births, as well as marriages and divorces.

They also cover employment regulations that expand work opportunities for women. Under the rule, all citizens have the right to work without facing any discrimination based on gender, disability or age.

How are women reacting?

Many Saudi women have taken to Twitter to celebrate the move, with prominent influencer and talk show host Muna AbuSulayman tweeting: “A generation growing up completely free and equal to their brothers.”

The changes that occurred today in setting Ø³Ù† Ø§Ù„Ø±Ø´Ø¯ the age of adulthood for women and men at 21 is so much more than lifting the travel permission.

It signals full equality in the eye of the law. It signals what modern Sharia is capable of

The first woman to become an envoy for the kingdom, Saudi ambassador to the US Reema bint Bandar Al Saud, also hailed the changes:

I am elated to confirm that KSA will be enacting amendments to its labor and civil laws that are designed to elevate the status of Saudi women within our society, including granting them the right to apply for passports and travel independently. 1/4

These new regulations are history in the making. They call for the equal engagement of women and men in our society. It is a holistic approach to gender equality that will unquestionably create real change for Saudi women. 3/4

“If fully implemented [this is] a big step in letting adult Saudi women take control of their own lives,” Kristin Diwan from the Arab Gulf States Institute in Washington DC told the AFP news agency.

Others are wary of the new reforms.

So before we all start rejoicing these reforms we need 2 remember that the Saudi government has set the bar so low for human rights that any minor reform will always seem monumental.

Some conservatives in the country have reacted negatively to the changes, with one woman telling Reuters news agency: “Imagine if your girls grow up and leave you and don’t return, would you be happy?”

Despite the latest reforms, other parts of the guardianship system remain in place. These include women requiring permission from a male relative to marry or live on their own, as well as leave prison if they have been detained. They still cannot pass on citizenship to their children, nor can they provide consent for their children to marry. 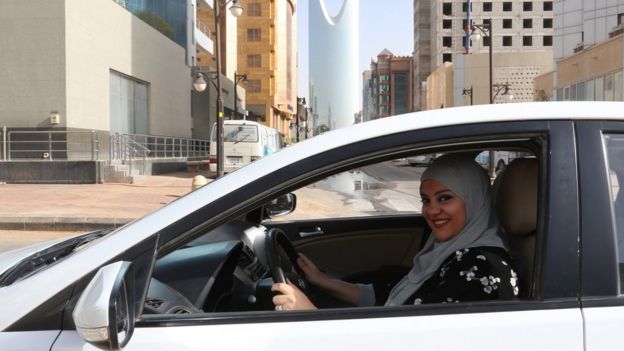 Saudi women were allowed to drive more than a year ago, but restrictions on them remain

In a bid to open up the country, Crown Prince Mohammed bin Salman unveiled a plan in 2016 to transform the economy by 2030, with the aim of increasing women’s participation in the workforce to 30% from 22%.

However, rights groups have decried his crackdown over the last year on some of the country’s leading women’s rights activists who had campaigned for the right to drive or win equal rights to men.

These women, including prominent campaigner Loujain al-Hathloul, are currently facing trial and several of them say they have been tortured whilst in detention.

There have been several high profile cases of women seeking asylum in countries such as Canada, citing claims of gender oppression.

The issue hit the headlines in January when 18-year-old Rahaf Mohammed al-Qunun fled Saudi Arabia in a bid to escape to Australia, but ended up in a stand-off at an airport hotel in the Thai capital Bangkok. After international appeals for help, Canada later granted her asylum.

In March, two young Saudi sisters who had been hiding in Hong Kong were granted humanitarian visas in a third country.

In a similar case a month later, another pair of sisters fled to Georgia after seeking international help on Twitter and were eventually relocated to another country.

What’s behind the move?

This is the biggest move so far to dismantle the male guardianship system in Saudi Arabia.

Saudi women’s rights activists have fought hard to remove the multiple restrictions on their lives – they presented a petition to the authorities demanding change some three years ago.

But the leading women involved in that campaign are now either detained or abroad. Internationally, their efforts have received great attention, but in Saudi Arabia itself, Crown Prince Mohammed bin Salman and his advisers still seem intent on denying them any credit for the changes.

That makes reform appear to come from the top down. For many Saudis – both men and women – this makes the Crown Prince a hero.

Outside the Kingdom, it helps refurbish his image tarnished as it is by the killing of Jamal Khashoggi – at a time when the Saudis are choosing to play an increasingly visible role on the world stage.

But both hardline conservatives and women’s rights activists in Saudi Arabia are united in their suspicion of Mohammed bin Salman’s motives – and their sense that this is all about his continuing accumulation of power, whether political, financial or cultural.