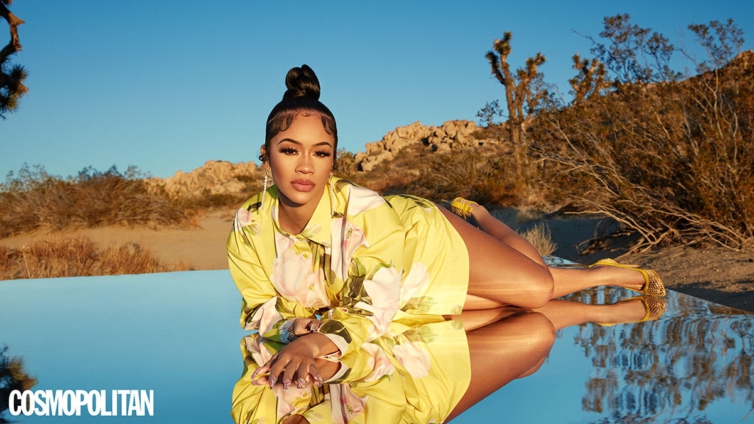 “Last year was the year that I finally became comfortable in my own skin. I kind of figured out what my purpose was,” Saweetie says in her new Cosmopolitan cover interview. “I think it’s important to show little Black and brown girls that they can be successful in whatever they want to do. If I can do it, you can do it too.”

The Cosmopolitan story tracks Saweetie’s career from viral internet fame to record label bidding wars to the artist we see today one who has reclaimed her power in the public eye.

The California rapper has also experienced her fair share of setbacks, though she credits her early career experiences with making her a stronger performer.

In one part of the story, she discusses the infamous HOT97 interview in February 2018, where the radio host says her freestyle is “basic.” As writer Rawiya Kameir puts it, “He seems to suggest she has little to offer but her beauty.” The moment stuck with Saweetie.

“It was a really dark point in my life. I went from being so loved so quickly because of ‘Icy Grl’ to, on my first promo run, well, you saw the interview. The script flipped really quick, like night and day. I was like, Wait… I had PTSD from that,” she told Cosmo.

Online, people were critical of her first performances. “Because ‘Icy Grl’ was so popular, I was being booked at huge festivals,” she told the outlet. “I was literally thrown into it.”

It’s not the first time that Saweetie has been underestimated. But she’s used those criticisms and early career hardships to make her the person she is now. “I’m really grateful for my start,” Saweetie told Cosmo.

“Because the mistakes, the struggle, the grind—it allows me to appreciate the rewards that come now because I know what it feels like to sleep in motels, to drive and do promo, to be stressed out.”

And certainly, Saweetie has been one of the most exciting performers to watch over the past year specifically. She’s kept us dancing with her July 2020 release “Tap In,” which was accompanied with a remix the following month, featuring Post Malone, DaBaby, and Jack Harlow.

October brought “Back to the Streets” with Jhené Aiko, which was produced by Timbaland. And then Saweetie released the fun-filled, hot girl anthem “Best Friend” with Doja Cat in January 2021.

Meanwhile, she’s also used her platform for good; she donated $150,000 to Black Lives Matter last year, and had a virtual sit down with Nigerian music artist Omah Lay, allowing him to educate her followers on #ENDSARS. She also recently launched a nonprofit, The Icy Baby Foundation, with her grandmother to support single mothers, low-income communities, education efforts, and people living with autism.

“I know that as long as I work hard, I’ll become one of the best,” Saweetie told Cosmo. And we definitely believe her.