Sekou Nkrumah: "Uncultured" Hamah had no place in govt - MyJoyOnline.com

Sekou Nkrumah: “Uncultured” Hamah had no place in govt 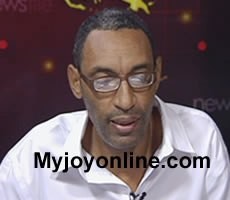 A member of the National Democratic Congress is rubbing salt in the injury of the sacked deputy Communications Minister describing her as an "uncultured" person, who should not have been appointed as minister in the first place.

"How on earth was somebody like that appointed as minister", Sekou Nkrumah blurted in an interview on Asempa FM.

Victoria Hamah grabbed the news headlines on Thursday, after a controversial leaked tape went viral in the media.

She was sacked on Friday by President John Mahama in a press statement released and signed by the Information Minister Mahama Ayariga.

No official reason was given for her dismissal even though government sources attribute the dismissal to the controversial leaked tape, which some described as embarrassing to the government.

Hamah has not been spared public criticisms, both from within and outside her own party.

Speaking on the controversial matter on Asempa FM's Ekosii-Sen programme, son of Ghana's first president, Sekou Nkrumah said the sacked minister had shown grievous signs of indiscretion and did not even deserve a place in Mahama's government in the first place.

He said Victoria Hamah was "uncultured" and "was not fit for the position" of which she was sacked.

He further explained that as a public official, there was nothing like privacy and therefore, Hamah ought to have shown a great deal of circumspection in her utterances whether public or private.

Sekou Nkrumah said given the experience the NDC party has garnered in Ghana's political history, it was inexplicable how Victoria Hamah landed a ministerial appointment.

He also questioned how the deputy minister sailed through the NDC primaries, which eventually led to her election as the NDC Parliamentary candidate for Ablekuma West constituency

Describing it as a "kneejerk" reaction, Sekou Nkrumah said the president should have heard the side of Victoria Hamah's story before letting down the axe.