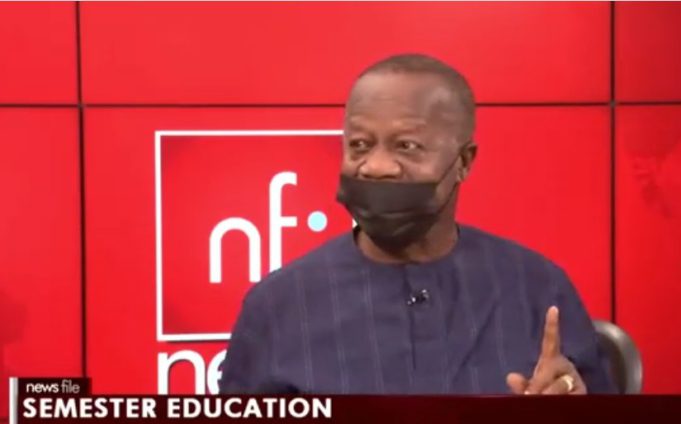 Chairman of the Ghana Education Service (GES) Council, Michael Nsowah, has said that many factors were considered before deciding to adopt the semester academic system for the basic schools.

According to him, among other things, the system was expected to make it possible for teachers to pursue higher education to upgrade their knowledge and skills.

Speaking on Newsfile, on Saturday, Mr. Nsowah said, “the debate on this semester or trimester was such that we needed to consult a lot of people. So many things were taken into consideration and in this particular case, after meetings, we realised that we need to give the teaching fraternity the opportunity to upgrade their qualifications.”

He explained that during meetings with the teacher unions, it came to light that many teachers leave their classes unattended to participate in sandwich programmes they have enrolled in.

This, he stated, does not only affect teaching and learning, but teachers risk losing some part of their salary should they fail to go to class.

“So with the unions, we said ‘let us find a specific block of time when the teachers are free and can go to classes’. So we agreed with all three teacher unions on all this and that was incorporated in the timetable,” he explained.

Mr. Nsowah said that with the semester system, teachers would be able to attend classes during the 10 weeks of vacation.

“So when we made the proposal of 20 weeks, you see that after 10 weeks there is a break for 10 days for the children to go and rest and come back. When we finished that calendar, there were about 10 weeks for holidays where those who have enrolled on the distance courses will be able to attend their eight-week sandwich courses.”

This comment follows opposition by various stakeholders in the education sector against the introduction of the semester system in basic schools. The system was expected to be implemented from Kindergarten to Junior High Schools for the 2022 academic calendar.

However, the announcement gathered much opposition. Some teacher unions, including the Ghana National Association of Teachers (GNAT), vowed to kick against its implementation should the government refuse to withdraw it immediately for broader consultations.

Also, the Minority in Parliament who backed the calls for withdrawal of the policy, said the semester calendar “lacks professional touch.” They, therefore, called for a more “academically friendly and healthy one.”

Following the opposition, the Ministry of Education reversed its decision.

“After further consultation on the issue, the Honourable Minister for Education has directed that the calendar for Kindergarten to Junior High School for the current academic year should be reverted to the Trimester system,” part of their statement reads.

Consequently, the Education Ministry announced a new date for the academic calendar of the basic schools.

Pupils in the basic schools will now be in school from January to April 14 for the first term and resume on May 10 to August 18 for the second term. The third term will begin from September 13 to December 22, 2022.

Mr. Nsowah noted that with the reinstatement of the trimester system and attendance being monitored closely, teachers do not have the free will to abandon classes to pursue their courses.