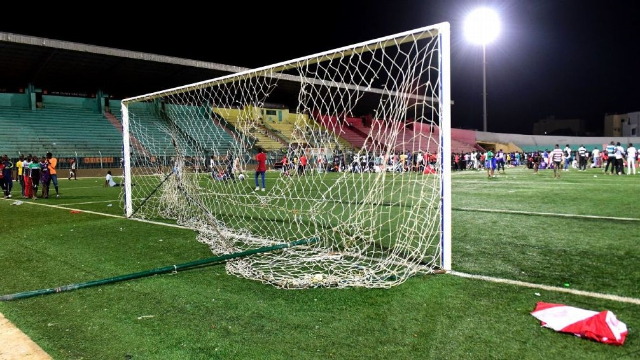 Authorities in Senegal have suspended all sporting events in the country until the end of the month after eight people were killed at a football match on Saturday.

No sports or cultural events will take place in the west African nation until after the elections on 30 July as the government attempts to avoid a repeat of the weekend's tragedy.

Trouble flared at the Coupe de la Ligue final between US Ouakam and Stade de Mbour at the Stade Demba Diop in the Senegalese capital Dakar after Mbour had taken the lead in extra-time.

Police used tear gas in an attempt to quell the violence, and as supporters fled, a wall collapsed, leaving eight people, including a small girl, dead and 88 injured, according to local authorities.

"I have ordered the immediate opening of a rigourous enquiry which will allow the placing of responsibility, to identify those at fault and transmit without delay the conclusions of the enquiry to the judicial authorities," President Macky Sall said on Sunday, adding "sport is not an area in which violence should be expressed."

A meeting of the Senegalese football league, headed by its president Saer Seck, on Sunday studied reports of the incident from the police, the clubs, the referee and the match organisers.

"We've already been trying to take a number of measures for some time now, we've been staging training and awareness sessions for fans, we have been talking about training stewards," Seck said. "We have been struck by the terrible reality. We're taking stock of that."

Police countered allegations that they had been to blame as they had vacated an area that was supposed to act as a buffer between rival rans.

"In such situations, the presence of the police is not to charge but rather contain the crowd to avoid greater casualties particularly with the collapse of a wall that has led to injuries and deaths," a press release read.

"Contrary to what has been put forward by some media, the Stade Demba Diop had, as usual in such circumstances, adequate security provision on the day."

The Stade Demba Diop was built during the 1960s, and had raised concerns in recent years due to the antiquated nature of the structure.

Stadium tragedies are an all too common occurrence in African football, and Saturday's disaster is the latest in a long string of such disasters.

In 2001, 43 fans lost their lives at Ellis Park in Johannesburg during the Soweto Derby between Kaizer Chiefs and Orlando Pirates, while a month later, 127 died in the Ghanian capital Accra when police fired tear gas to disperse fans during a match between rivals Hearts of Oak and Asante Kotoko.

Twenty-two supporters died and over 100 were injured at the Stade Felix Houphouet-Boigny in the Ivory Coast in March 2009 ahead of a World Cup qualifier, with the authorities later blaming a fan stampede, while in Lusaka, Zambia, 21 fans were killed over two incidents in 1996 and 2007.