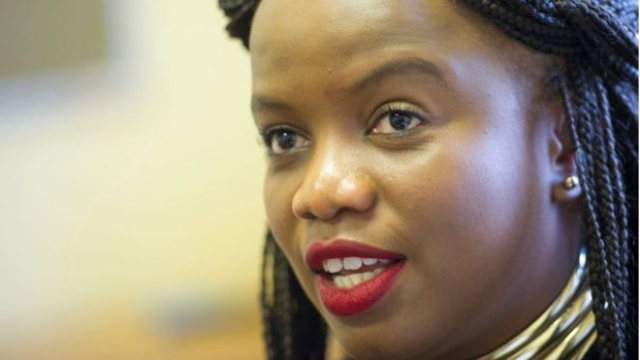 A black South African MP says she punched a man in self-defence after he allegedly hurled racial abuse at her.

Phumzile van Damme from the opposition Democratic Alliance said she got into a row with a white woman at Cape Town's V&A Waterfront when the man intervened.

She said the man, who was white, was "threatening violence" and used vulgar language to tell her to get out, referring to her as "you black".

The V&A Waterfront, a top tourist site, has apologised for the incident.

Ms van Damme was unhappy with the treatment she received from a security officer when she reported the incident.

"We regret this incident, which we did not handle with the necessary objectivity, respect and empathy," the V&A Waterfront said on its Twitter account.

Ms van Damme said she was standing in a queue in the supermarket when she had a quarrel with a woman who allegedly told her she would "push [her] aside".

She said a man, who was with the woman, "was threatening violence so in self-defence I punched him in the head".

Ms van Damme said she accepted V&A Waterfront's apology and their commitment not to tolerate unacceptable behaviour from its patrons.

She has, however, threatened to file charges with the police.

I requested CCTV footage from the CEO of the V&A and he informed me it can only be made available to SAPS in terms of the law. I will be laying charges tomorrow, I unfortunately do not know the names of the racist family but I hope @SAPoliceService will be able to track them down