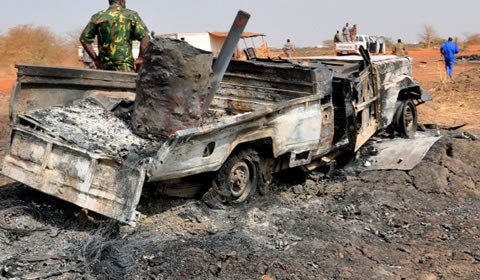 South Sudan rebel leader Riek Machar has told the BBC he will enter peace talks, claiming his forces have captured the key town of Bor.

He had previously demanded 11 detainees accused of being co-conspirators in the coup plan be freed before negotiations.

He denies there was a plot – alleged by his rival President Salva Kiir.

Uganda's president has threatened the rebels with military action if they fail to agree to a ceasefire by the end of Tuesday, and begin talks.

In a BBC interview on Monday, President Kiir ruled out any power sharing with Mr Machar to halt violence that has killed at least 1,000 people in the last two weeks.

"These men have rebelled. If you want power, you don't rebel so that you are rewarded with the power. You go through the process," he said.

Mr Kiir has consistently refused to release Mr Machar's political allies, arrested when he made the coup plot allegations.

It has not been confirmed whether Bor has fallen to Mr Machar's forces – a mix of mutinous soldiers loyal to him and an ethnic militia called the "white army", known for putting white ash onto their bodies as a kind of war-paint.

A UN spokesman said the town of Bor had come under attack at day break, not far from the town's UN compound.

Later, Mr Machar told the BBC he was sending a delegation to Addis Ababa for peace talks, where he will discuss a ceasefire.

He also said his delegation will be led by Rebecca Nyandeng Garang, the widow of John Garang, who led South Sudanese rebel forces against Khartoum for many years.

The BBC's James Copnall in the capital, Juba, says as a Dinka she may help Mr Machar challenge the allegation that his rebellion is primarily from his Nuer ethnic group.

According to the AFP news agency, both parties are expected in the Ethiopian capital soon.

"Both President Salva Kiir and Dr Riek Machar are coming to Addis Ababa for talks, they are coming now and should meet today," Ethiopian foreign ministry spokesman Dina Mufti told the agency.

Talks in South Sudan's troubled history have often been preceded by renewed fighting, to allow the belligerents to go to the negotiating table in a position of strength, our reporter says. 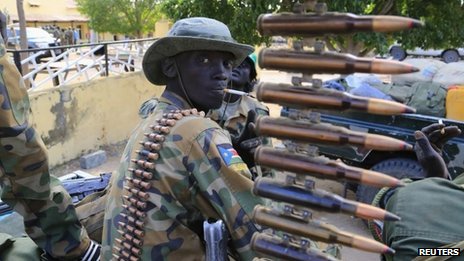 In recent days, thousands of people have fled from Bor, the capital of Jonglei state.

The fighting initially broke out more than two weeks ago in Juba, and has now spread to many parts of the country.

The UK has announced a £12.5m ($20.6m) aid package to support organisations, including the International Committee of the Red Cross and UN agencies, to provide tents, emergency health care and other supplies.

Mr Machar was President Kiir's deputy until he was sacked in July.

What began as a power struggle between the two men has taken on overtones of an ethnic conflict. The Dinka, to which Mr Kiir belongs, are pitted against the Nuer, from which Mr Machar hails.