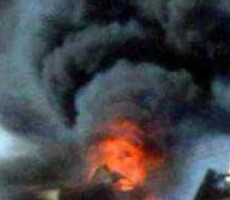 A suicide bomber drove a car packed with explosives into a busy bus station in the northeast Nigerian town of Potiskum on Sunday, killing four people and wounding 35, police said.

There was no immediate claim of responsibility for the attack, which bore the hallmarks of Islamist militant group Boko Haram and added to the country's litany of security woes less than a month before a closely fought presidential vote.

"The information I have is that the car was pretending to be scouting for passengers," Yobe state police commissioner Danladi Marcus told Reuters by telephone.

"Five people including the bomber were killed in the attack with about 35 others receiving treatment for various injuries at Potiskum General Hospital."

Violence is surging before polls pitting President Goodluck Jonathan against former military ruler Muhammadu Buhari in the closest contest since the end of military rule in 1999.

A suicide bomber blew himself up at a market in the northeast Nigerian city of Gombe on Friday, killing at least six people and wounding 10. [ID:L6N0UV45S]

Boko Haram has killed thousands, kidnapped hundreds of mostly children and destabilized the northeast of Africa's top oil producer in its five-and-a-half year campaign for an Islamic state.

Violence has also spread into Nigeria's neighbors around the Lake Chad basin.

A contingent of soldiers from Chad has arrived in northern Cameroon where it will deploy to the Nigerian border as part of efforts to contain the insurgency, a spokesman for Cameroon's defense ministry said on Sunday.