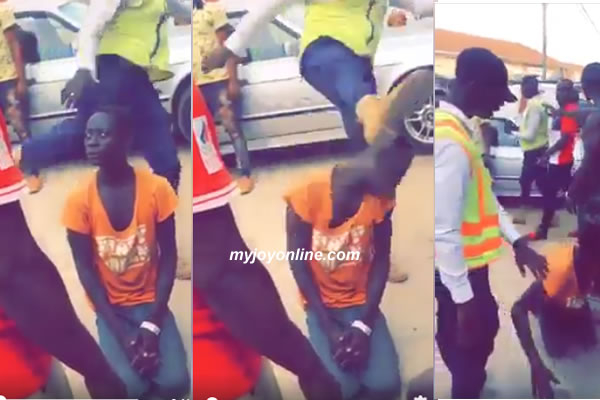 Four people, including a guard of the Agona West Municipal Assembly seen in a viral video booting the head of a boy they accused of stealing, have been remanded into police custody for assault.

Peter Danso, the guard and his colleague, Isaac Ntsiful on Monday appeared before the Swedru Magistrate Court together with Sampson Aikins, a baker and Francis Yorke, a student on provisional charges of conspiracy to commit crime and assault.

Police prosecutors pleaded with the court presided over by Mr Isaac Appietu to remand the accused to prevent them from interfering with ongoing investigation into the matter and for their own security as the incident had drawn the interest and ire of the public.

According to the police, there were other suspects yet to be arrested in connection with the case.

In a rebuttal, Mr Frederick Selby, lawyer for the four accused persons disagreed with the prosecution and pleaded for bail for them on the grounds that since the prosecution had presented a charge sheet containing charges against all the accused persons, it meant that they had completed their investigations.

He added that the accused persons had unlawfully been detained for more than 48 hours against constitutional provisions on fundamental human rights of all manner of persons.

He also took into account the safety of the accused persons since the issue had received huge public outcry and further charged the prosecution to hasten their investigation to enable the court to look into the merits of the case at the next adjourned date.