Butterfly pupae are easy targets for predators in search of an easy protein-rich meal, and one would think that the flashier the cocoon, the higher the chances of being spotted and eaten, but the Mechanitis Polymnia, aka the orange-spotted tiger clearwing and its shiny, gold-like pods are proof that the opposite is true.

The orange-spotted tiger clearwing butterfly lives in the jungles of Central and South America, from Mexico all the way to the Amazon rain-forests. It’s a colourful little thing, with a wingspan of 65 to 75 millimetres, but it’s not exactly the most eye-catching of butterflies. Its pupae, however, are pure gold, literally. Well, not really literally, but they look just like elaborate gold jewellery hanging on the back of plant leaves, and even on the walls of houses in rural areas. 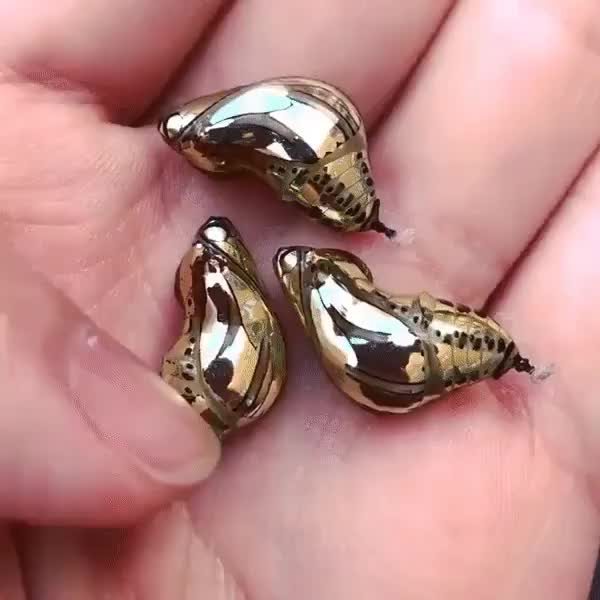 But unlike actual gold jewels, these shiny, metallic-looking chrysalises are not meant to draw attention, but distract predators and even discourage them from getting to close. It’s a natural defence mechanism, and a very effective one at that.

“They are actually very hard to see in nature, given the way all the colours are reflected,” Dr Keith Willmott, one of the world’s leading tropical butterfly experts, explains. It is believed that the shiny, reflective cocoon does a good job of concealing the pupa, making it seem like something else – such as hanging drops of water or simple shafts of light- to predators, and can even scare some threats away. Apparently, predators like birds, reptiles and giant spiders tend to run away when they detect the reflection of their own movement on the super-shiny chrysalis, mistaking it for a threat to themselves.

The surreal-looking cocoon of the Mechanitis Polymnia butterfly has spawned all kinds of fake facts online. There are photos of these awe-inspiring pupae captioned with all sorts of lies like they contain actual metallic particles, or that empty cocoons were once used as currency. That may seem plausible to some people, but science does a great job of debunking such myths.

First of all, the cocoons don’t contain any metals. They are made of chitin, a natural substance that gives some insects and crustaceans a shiny look. It’s also what most fish scales are made of. As for its potential as currency, that would have made sense if not for the fact that the cocoons actually lose their gold-like shine in just a few days, a week tops.

“The butterflies are only in the pupal stage for around a week, depending on the species, afterwards they lose the metallic color,” Dr. Ryan Hill writes.

“They lose their metallic colour almost immediately,” Costa Rica native Luis Ricardo Murillo-Hiller told Earth Touch. “I have never seen or heard of somebody, in any place, using the pupae as currency, and actually, they are almost to unknown to [the average person].”

Not to mention that empty chrysalises are extremely fragile, which doesn’t exactly make them ideal as currency, at least not the type that changes hands. That’s probably for the best though, or we’d have people scouring the jungle in search of them. This way, we can just admire their shiny beauty from afar.

Apparently, the orange-spotted tiger clearwing isn’t the only butterfly to spawn out of a jewel-like cocoon. Tithorea armonia, or the Harmonia tiger wing, has very similar cocoons, as you can see in the video above.