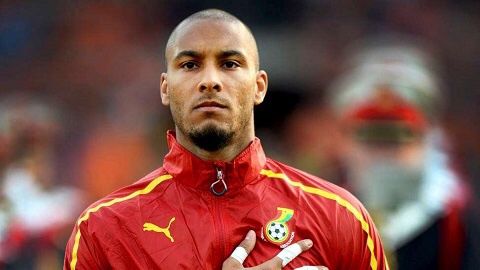 Former Ghana goalkeeper, Adam Kwarasey, says the Black Stars were disjointed at the 2014 World Cup in Brazil and has put the team’s shambolic exit at the group stage down to that.

Kwarasey decided to play for Ghana in November 2007 but was called upon to the national team for a match against Nigeria which was postponed due to security reasons. He made his international debut in September 2011 in an AFCON 2012 qualifier against Swaziland and featured against Brazil in another friendly before making Ghana’s squad for the 2012 Nations Cup in Gabon.

Kwarasey was the Black Stars’ first-choice goalkeeper throughout the tournament, as the Black Stars finished in fourth place and told Joy Sports in an exclusive interview the disappointment at the AFCON was much bearable than in the World Cup two years later.

Kwarasey made two appearances for the Black Stars during their successful 2014 FIFA World Cup qualifying campaign, serving as an understudy to Fatau Dauda. On June 2, 2014, Kwarasey was named in Ghana’s squad for the 2014 FIFA World Cup. The 34-year-old explained exclusively to Joy Sports that he felt palpable disunity in Ghana’s camp in Brazil

“The World Cup was disappointing, we can all say that. I won’t sit here and cry about how things went. I’m over it, I’m past it but that’s the tournament where I felt that ‘we are not together at all’ – as players and technical team. It wasn’t the best experience but it is what it is, and like I said, I am past it.”

The former Stromgodset goalkeeper started in goal for the Black Stars in the team’s opening match, a 2–1 defeat against the United States in Natal. Kwarwsey was dropped after Ghana’s remaining games against Germany (2-2-) and Portugal (1-2) in Brazil. Kwarasey said being dropped as the number one didn’t hurt as much as how the news got to him.

“If someone decides not to play me and it’s for the best thing for the team, I’m fine with that. But do it as a man and with respect. Tell me and look me in the eyes when you do and I will respect your decision. But I have to honestly say that I was in better form 3 weeks before the WC than I was during the WC because of the simple reason that I wasn’t responding to the training,” he added.

There were major problems in the Ghana camp two days before a crucial game that could qualify the team into the next round and against Portugal. Black Stars players boycotted training because they had not received their World Cup appearance money.

Head coach, Kwesi Appiah, drove midfielder Kevin Prince Boateng and Michael Essien out of camp citing indiscipline and Sulley Muntari was accused by the Ghana Football Association of “an unprovoked physical attack” on one of its members. Kwarasey insists not just the players should be blamed but the technical team too.

“Of course, what happens on the pitch is on us the players at the end of the day but I think some people know that they didn’t put things in order, the way they should have, to get the best out of the team. I am NOT talking about money; believe that a lot of the players would have played their hearts out for Ghana without getting paid. This was more about the principle of what we went through that ended in all the chaos.”

Nevertheless, Kwarasey, now sporting director at FC Oslo, has made peace with himself after the turn of events in Brazil.

The Black Stars missed out on Russia’s edition of the global showpiece in 2018 after a subpar qualifying run, but have made amends by returning to the competition after beating rivals Nigeria, in the all-important decider.

DISCLAIMER: The Views, Comments, Opinions, Contributions and Statements made by Readers and Contributors on this platform do not necessarily represent the views or policy of Multimedia Group Limited.
Tags:
2014 World Cup
Adam Kwarasey
Black Stars