TUC under pressure to declare nationwide strike over fuel increment 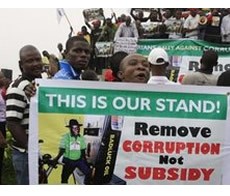 There is growing agitation among workers over what they say is economic hardship brought about by the recent fuel price increases.

The workers are mounting pressure on the Trades Union Congress, TUC, to declare a nationwide strike to compel government to restore the subsidies.

The TUC says it is consulting various groups in the country to inform its response to government’s decision but some section of labour are becoming impatient.

He feared rail services would soon grind to a halt.

The General Agricultural Workers Union said the cost of production and transportation of food has been badly hit.

Deputy General Secretary of the Union, Edward Kareweh said there is no justification for the removal of the subsidies when salaries have not been increased.