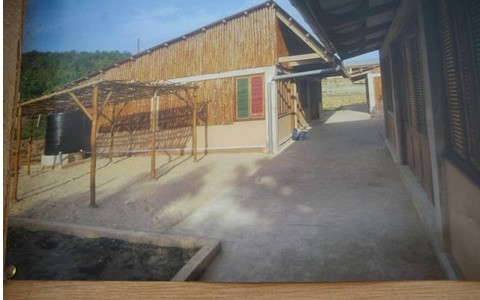 A coastal community in the Shama District, Amenano, has been selected to benefit from the first sustainable model Kindergarten complex in the entire Western Region.

The special facility, the first of which was financed by Tullow at Ayensudo in the Komenda Edina Eguafo Abirem Municipality (KEEA) in the Central Region, will provide a pre-school setting of three classrooms for the community to take 120 children annually.

The idea to build the USD162,000 facility within ten months, was mooted by Sabre Charitable Trust, and supported by the Shama District Assembly and the Ghana Education Service (GES), which will own and manage the school.

The Sabre Charitable Trust, a not-for-profit company is a charity organisation working at all levels of the Ghana education system, with a particular focus on kindergarten, where the needs are greatest. Sabre has been operating in Ghana in the last eight years with an office at Elmina in the Central Region. Programmes Director for the Charity’s Brighter Future initiative Dominic Bond, says the Kindergarten structure they are building will improve the quality of education for Ghanaian children at the early stages.

“Through a partnership with Arup, a construction firm with global expertise, and in close collaboration with the community, the Sabre Trust will design and build a school that is setting the standards for school buildings in Ghana. It has been recognised by the GES, by UNICEF, by the UK Department for International Development as being one of the best kindergarten schools in the country. The unique thing about it is the fact that they provide an environment that supports learning. They are designed with the kids in mind, with spacious classrooms, they are cool because of some of the design features in the roofing, and they have indoor and outdoor learning areas” he noted.

“The school is also very environmentally friendly, using local materials in a very sustainable and durable way such as bamboo, palm-kennels, coconut husk, and includes a roof designed to capture rain water for washing and drinking. Local people work on the building projects, and they gain new construction skills. These buildings have been built to withstand earthquakes” he added.

The District Chief Executive for Shama, Enoch Kojo Appiah said it took the Assembly a lot of lobbying to bring the project to Shama, promising they will ensure that every child in the fishing community compulsorily enrolls in the Kindergarten. The Shama District Education Director, Florence Nkum, urged parents of the Amenano community to enroll their children in the school at the early stages to give them a solid foundation. She however appealed to fathers not to shirk the responsibility of educating their children on mothers alone. She further asked Sabre to offer training to teachers who will be posted to the Kindergarten.

A Project Officer at Tullow Ghana, Elijah Boye-Ampah, said Tullow as part of its commitment to education is focusing on building a stronger foundation hence the investment in Kindergarten structures. He said although they were offering scholarship for locals to acquire Masters’ degrees and providing science laboratory equipments for Senior High Schools, there was the need to strengthen early childhood education which forms the basis of the education chain.

He said children in the beneficiary community of Amenano walk about two kilometres each day to attend the nearest Kindergarten, a situation he says often discouraged their parents who preferred to keep them at home or take them to their workplaces. As a result, many children had no formal education before attending primary school at age six.

He said the Tullow project would also allow the fishmongers to concentrate on their livelihoods whilst their children are taken care of at the Kindergarten.