Two inmates escape while on prison farms in Ashanti region 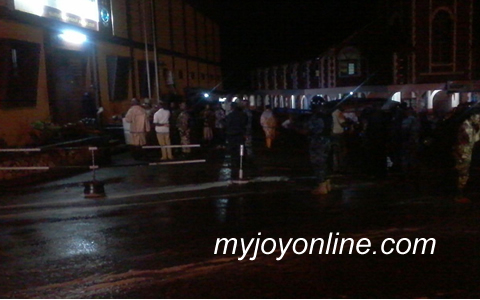 Police in the Ashanti region are on a hunt for two prisoners who escaped while providing external labour on farms last Friday.

The two are serving two years at the Amanfrom Camp prisons near Kumasi after they were convicted for stealing and unlawful entry, PRO Lance Corporal George Owusu confirmed.

He ruled out the incident as a jail break.

Narrating the incident, Lance Corporal George Owusu told Luv FM's Erastus Asare Donkor the escape occurred the same Friday that 47 inmates in the Amanfrom prison were released as part of 900 prisoners who were granted amnesty by President Mahama on Republic Day, July 1.

One prisoner bolted while working on a vegetable farm just behind the Amanfrom prison. About two hours later, the other also escaped while on the piggery farm.

The prison official lamented that the ratio of one officer to four prisoners could be partly responsible for the failure of prison officers to adequately monitor the work of the inmates on the farms.

The PRO refrained from giving out the names of the escapees but assured that the public has no cause to be alarmed.

He said the Amanfrom camp prison is a low-sentence prison where inmates serve a maximum of three years.

“The Amanfrom camp prison is settlement camp. We do not bring high profile prisoners, armed robbers, rapists are not here. Those who even go out are those who in no time will be going home, they are the people we take on our farms to do external labour”, he explained.

The Ashanti Regional Prisons Service has since begun investigations.