Uber said it is suspending self-driving car tests in all North American cities after a fatal accident.

A 49-year-old woman was hit by a car and killed as she crossed the street in Tempe, Arizona.

Uber said that its "hearts go out to the victim's family".

"We're fully cooperating with @TempePolice and local authorities as they investigate this incident", the company said in a statement on Twitter.

Our hearts go out to the victim’s family. We’re fully cooperating with @TempePolice and local authorities as they investigate this incident.

Police said the accident happened Sunday night while the car was in autonomous mode. A human monitor was also behind the wheel.

Police said the woman, Elaine Herzberg, had not been using a pedestrian crossing. Herzberg, who police say may have been homeless, was taken to a local hospital where she died.

The US National Highway Traffic Safety Administration and the National Transportation Safety Board said they were sending teams to Tempe.

Companies including Ford, General Motors, Tesla and Waymo are investing heavily in research to develop self-driving cars, which are often characterised as the future of the industry and hailed as a way to reduce traffic accidents.

Many states across America have welcomed the tests in the hope of keeping themselves at the forefront of new technology.

However, there have been warnings that the technology is being deployed before it is ready.

Anthony Foxx, who served as US Secretary of Transportation under former President Barack Obama, called the accident a "wake up call to the entire [autonomous vehicle] industry and government to put a high priority on safety."

More than a dozen states in the US allow autonomous vehicles on the roads to some degree. Officials typically require a person to be on hand either in the car or remotely in case something goes wrong, according to the Center for Automotive Research.

The US is working on national safety guidelines for such vehicles. 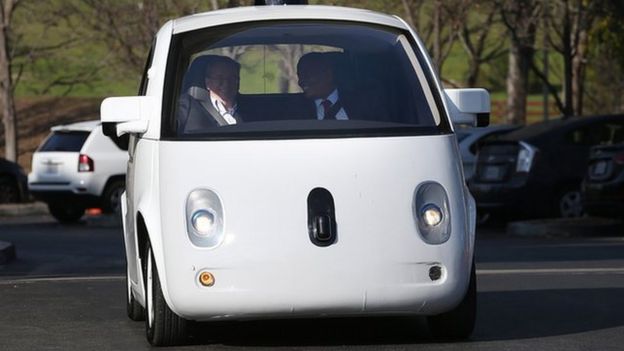 A self-driving car at the Google headquarters in 2015

Consumer Watchdog, a lobby group that has warned of the risks of autonomous cars, on Monday called for a moratorium of such vehicles on public roads, describing the accident as a "tragedy we have been fighting years to prevent".

"We hope our calls for real regulation of driverless cars will be taken seriously going forward by Silicon Valley and the Trump Administration," the group wrote on Twitter.

The death comes a year after Uber took its self-driving cars off the roadfollowing an accident that left a Volvo SUV on its side in Arizona. The programme was later reinstated.

Carla Bailo, president and chief executive of the Center for Automotive Research, said more information about how the crash occurred is necessary before officials can say what went wrong and how the self-driving system should be improved.

She also said the fatality should be considered in the context of all accidents.

More than 37,000 people, including almost 6,000 pedestrians, died in traffic accidents in the US in 2016, according to the US Department of Transportation.

"We need to be fair and look at all the data," she said. "But I don't think anybody is taking this lightly. By far safety is the first concern.

Tempe Mayor Mark Mitchell said he supports autonomous car tests because of the technology's potential. He also praised Uber's decision to suspend the programme as "responsible".

"Our city leadership and Tempe Police will pursue any and all answers to what happened in order to ensure safety moving forward," he said.