A London court will consider later today if Uber is "fit and proper" to hold an operator licence in the capital.

The taxi app company will make its case at Westminster Magistrates' Court in a hearing expected to last several days.

Uber said it has since made significant changes, such as improving procedures for reporting criminal actions.

Various media outlets have quoted a memo reportedly sent by Uber to Transport for London, in which it said that as many as 1,148 London-licensed Uber drivers had been accused of "category A" offences such as sexual incidents, stalking and dangerous driving.

The court will take the changes made by Uber into account and decide whether it is now fit to hold an operator licence.

The original reasons for the refusal were outlined in a 21-page document.

Uber has been allowed to carry on operating in London while awaiting to appeal.

"I know we got things wrong and that we have more work to do. But I promise Londoners we will keep listening and improving as Uber moves forward in a new direction," Uber's UK general manager, Tom Elvidge, said in May.

Justin Bowden, national secretary at GMB, the union for taxi drivers, said: "Uber lost its licence in London because it refused to play by London's rules, particularly on the crucial issue of passenger safety, and it won't get it back until it accepts that an 'Uber's way, or no way' attitude to safety and its drivers will not prevail."

He added: "Uber's licence will not be returned by legal action, but by genuine contrition and real change, which can only come about from engagement with Transport for London as the licensing authority and drivers' representatives like GMB." 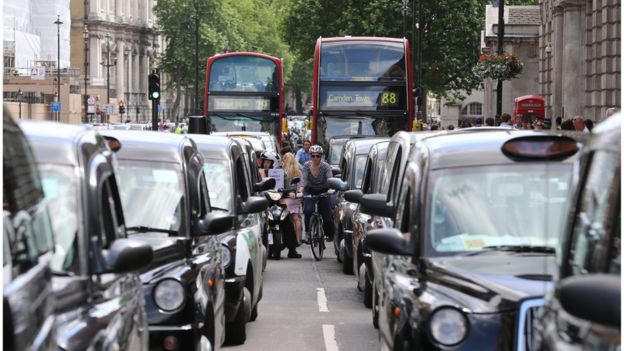 Taxi drivers have been campaigning against Uber, such as engaging in this "go slow" protest in 2014

BBC technology correspondent Rory Cellan-Jones says that Uber is now looking for an 18-month licence, rather than the five-year licence it was originally seeking.

"It's kind of putting itself on probation," he said. "There have been plenty of talks between the two sides, so the question will be whether the court thinks they've done enough."

Our technology correspondent says there has been "a change of mood" at Uber under its new boss, Dara Khosrowshahi. Whereas the firm used not to care "whose feet it trod on", Mr Khosrowshahi has tried to "paint the picture of a kinder, gentler Uber".

According to the firm, 3.6 million passengers regularly use its app in London and it has 45,000 drivers in the city.

Since being denied a licence to operate in London, Uber has implemented a number of changes.

Uber now reports crimes directly to the police – previously it had logged criminal complaints with Transport for London, which caused delays.

Drivers are now only allowed to use the app in the region they hold a private hire licence.

The working hours of its drivers are also more tightly regulated. A licensed driver on its app must take an uninterrupted six-hour break after 10 hours of driving with a passenger or travelling to a pick up.

Drivers who do not take a long enough break will not be able to log in to the app and take trips.

The company has also revamped its leadership. Three independent non-executives have been appointed to its UK board.

Uber has also had difficulties getting licences in Brighton, York and Sheffield.

In a separate case in 2016, Uber lost a legal battle over the status of its drivers.

A London employment tribunal ruled that its drivers were workers, rather than self-employed.

It meant drivers would be entitled to holiday pay, paid rest breaks and the national minimum wage.