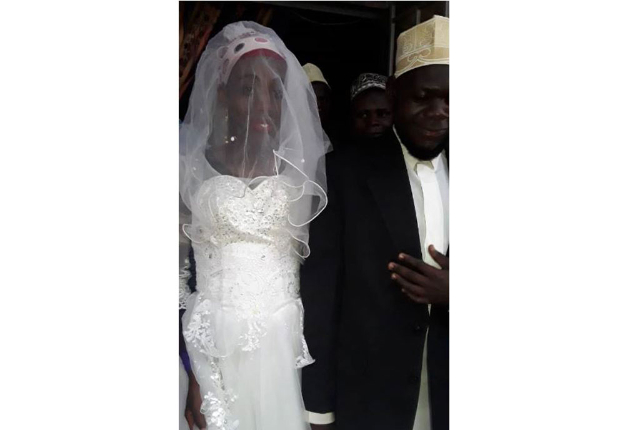 A Ugandan imam who married a man thinking she was a woman has been suspended from his post, the Daily Monitor newspaper reports.

Sheikh Mohammed Mutumba was shocked to discover some two weeks into his marriage that his hijab-wearing wife Swabullah Nabukeera was a man named Richard Tumushabe, the newspaper reports.

The discovery was made after police arrested Tumushabe on suspicion of stealing a television set and clothes from a neighbour at his new marital home, it adds.

“As the police’s normal practice, a female police officer, searched the suspect thoroughly before taking ‘her’ to the cells. However, to the shock of the officer, the suspect had stacked clothes in the bra to hoodwink that they were breasts,” Mr Mugera was quoted as saying.

Sheikh Mohammed Mutumba, the Imam of Kyampisi Masigid Noor mosque with his ‘bride’ who later turned out to be a man, on their wedding day.

Sheikh Mutumba – an imam at a mosque in Kyampisi village, some 100km (62 miles) north-west of the capital, Kampala – had not had sex with his “bride” because “she” alleged that “she” was menstruating, the newspaper reports.

“We have already charged him with impersonation, theft and obtaining goods by false pretence,” Mr Mugera was quoted as saying.

The Daily Monitor reports that Sheikh Abdul Noor Kakande, the regional kadhi (Muslim judge), said the incident was unfortunate, and the imam was being investigated.

It also quoted Sheikh Isa Busuulwa, the main imam at the mosque where Sheikh Mutumba preached, as saying that he had been suspended to preserve the integrity of the Islamic faith.

The Daily Monitor reported that Sheikh Mutumba has not been at his home for the last four days.

“He is too devastated by the incident and needs counselling,” an unnamed source is quoted as saying.