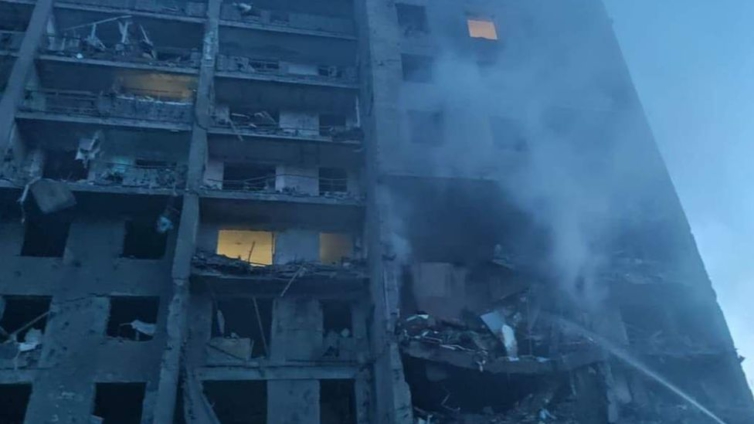 The Russian missiles hit several targets in Serhiyivka - including this residential building - at about 01:00 local time on Friday (22:00 GMT Thursday)

The state emergency service, DSNS, says 16 people were killed and 30 injured when one missile hit a nine-storey building in the Serhiyivka village.

Two more people, including the child, were killed in a separate strike on the village’s recreation centre.

Russia has fired dozens of missiles on Ukrainian cities in the past few day.

The DSNS said the missiles hit Serhiyivka at about 01:00 local time on Friday (22:00 GMT Thursday).

It released footage showing firefighters searching for survivors in the wreckage of the nine-storey building.

They are also seen carrying what looks like the body of one of the victims in a bag.

He said Soviet-era X-22 missiles were believed to have been used in the overnight strikes.

Ukraine had hoped that the Russian withdrawal on Thursday from the strategically important Snake Island would ease the threat to the Odesa port and wider region.