US election: Champ, Major and other White House pets 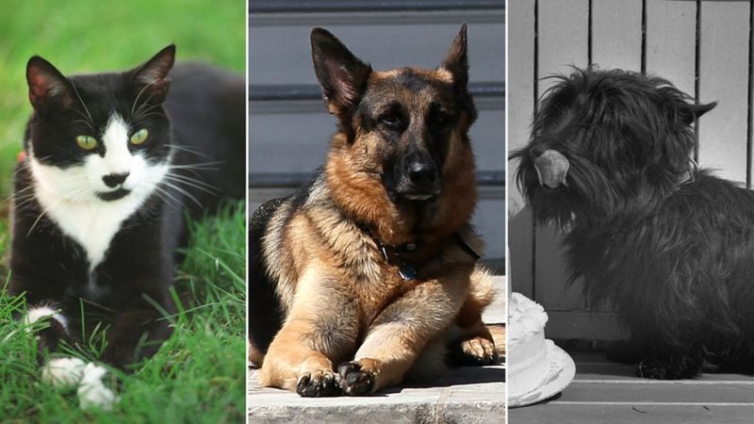 A Joe Biden presidency means the return of a long-held tradition of pets in the White House.

Donald Trump was the first US president in more than 100 years not to have a pet.

Democrat Mr Biden is set to bring his two German Shepherds – Champ and Major – with him to the sprawling residence after the inauguration in January.

The dogs have a big fan base on social media. A Twitter page in their name has tens of thousands of followers.

Here’s a look at what we know about the new “First Dogs”, and their predecessors.

Mr Biden got Champ as a puppy after being elected vice-president in 2008.

His wife, Jill, promised him the post-election pet, and posted pictures of different dogs on the back of the seat in front of him on his campaign plane, according to Politico.

The name, chosen by Mr Biden’s grandchildren, had sentimental significance.

In campaign speeches for the 2008 election, he recalled how his father would tell him: “Any time you get knocked down, champ, get up!”

Major was fostered and then adopted in 2018 from the Delaware Humane Association.

In an Instagram post during the campaign, Mr Biden shared a video of Major with the caption: “No ruff days on the trail when I have some Major motivation.”

Portuguese Water Dogs Bo and Sunny were residents of the White House during Barack Obama’s presidency.

When he declared victory, Mr Obama told his daughters: “You have earned the new puppy that’s coming with us to the White House.”

Bo was given as a gift to the Obama children from Senator Ted Kennedy in 2009, while Sunny came along in August 2013.

Bo, who has a white chest and front paws, and the all-black Sunny proved popular, even helping with official duties.

“Everybody wants to see them and take pictures,” Michelle Obama said during her husband’s presidency.

“I get a memo at the beginning of the month with a request for their schedules, and I have to approve their appearances.”

Bill Clinton had a chocolate Labrador called Buddy during his time as president, as well as a cat named Socks.

The pair often fought and the New York Times jokingly called them nemeses.

Mr Clinton told reporters in 2000 that Buddy would sometimes sleep next to him when his wife was away.

Hillary Clinton even wrote a book about the two pets, called Dear Socks, Dear Buddy, which includes letters from children and details about their rivalry and habits.

Among his pets, George W Bush had two Scottish Terriers called Miss Beazley and Barney while he was president.

The dogs featured in videos released by the White House such as “A Very Beazley Christmas” and “Barney Cam”.

Mr Bush has described Miss Beazley as “a source of joy”, and said he and Barney shared a love for the outdoors.

Mr Johnson’s daughter, Luci, found Yuki at a petrol station in his home state of Texas on Thanksgiving Day in 1966, according to the Presidential Pet Museum website, which compiles information on the White House pets.

Luci gave the dog to Mr Johnson as a birthday present the following year.

The pair did everything from attending cabinet meetings to swimming together.

“They shared a very significant bond that personified the American spirit: Only in America could a poor boy from Johnson City end up in the White House,” his grandson once said.

Fala was given to Mr Roosevelt by his cousin in 1940, and the president named him Murray the Outlaw of Falahill, after a Scottish ancestor.

According to the Presidential Pet Museum, Fala had a bone brought up on the president’s breakfast tray every morning, and even needed a secretary appointed to him to answer his mail.

The president had the cake pictured below made especially for Fala’s birthday.

In a 1942 campaign, Fala donated toys to promote scrap rubber collections for the war effort.

Films have been made about Fala, and the dog is even memorialised in a statue next to one of Mr Roosevelt at the Franklin Delano Roosevelt Memorial in Washington DC.

It’s not just cats and dogs who have held the esteemed title of “first pet”. There have also been birds, hamsters and even ponies.

Macaroni was a gift to John F Kennedy’s daughter Caroline from Lyndon B Johnson.

The pony was usually stabled in Virginia but came frequently to the White House, where it was pictured roaming around the grounds.

According to the Presidential Pet Museum, when Jackie Kennedy was giving a tour to the empress of Iran, Macaroni nuzzled Queen Farah in an apparent attempt to eat the daffodils she was carrying.

Like other presidential pets, Macaroni became famous, receiving fan mail and even appearing on the cover of Life magazine.