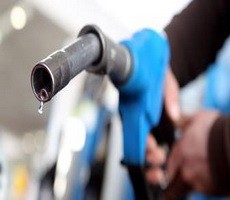 The average price of a gallon of gasoline in the United States fell 25 cents in the past two weeks, tumbling to its lowest level in more than five-and-a-half years, according to the Lundberg survey released Sunday.

Prices for regular-grade gasoline fell to $2.47 a gallon in the survey dated Dec. 19, down 25 cents since the previous survey on Dec. 5.

The recent drop has taken prices down more than $1.25 a gallon since a recent peak in May of this year.

"This is mostly driven by crude oil prices, and absent a sudden spike we very well may see a drop of a few pennies more," said the survey's publisher, Trilby Lundberg. "That said, demand is up at these low prices."

U.S. crude futures have been sharply weaker of late, dropping for four straight weeks, as well as in 11 of the past 12 weeks. Crude prices fell 14.2 percent over the past two weeks, though they rose 5.1 percent on Friday, settling at $57.13 per barrel.

The highest price within the survey area in 48 U.S. states was recorded in Long Island at $2.82 per gallon, with the lowest in Tulsa, at $2.06 per gallon.