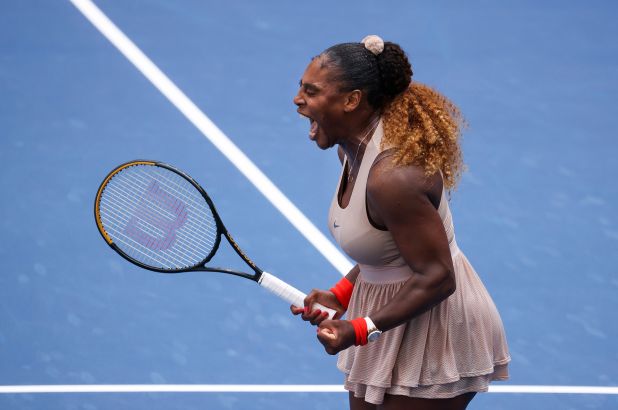 Serena Williams came into Monday’s contest with something to prove. After losing to Maria Sakkari at the Western & Southern Open in August, Williams was hungry for a win.

It marked Williams’ 100th win at Arthur Ashe Stadium. With the win, Williams, 38, advances to the quarterfinals. She’ll take on Tsvetana Pironkova in the next round.

With Sunday’s unceremonious exit by Novak Djokovic, the door to a first Grand Slam victory blew wide open for Dominic Thiem. The No. 2 seed at the US Open looked like the new favorite on Monday in a straight-sets win over No. 15 seed Félix Auger-Aliassime.

The Austrian needed a tiebreak to secure the first set. But he was dominant the rest of the match, cruising to a 7-6 (7-4), 6-1, 6-1 win to advance to the quarterfinals.

Thiem has never reached the US Open semifinals. He’ll face No. 21 seed Alex de Minaur next with a chance to do so. Thiem has made French Open final twice and advanced the Australian Open final in February, where he lost to Djokovic in five sets.

Ruthless Daniil Medvedev continued his stellar form on Monday by ending the run of Frances Tiafoe with a convincing 6-4, 6-1, 6-0 victory. The Russian grabbed the last eight games and took 17 of the last 20 points.

Tsvetana Pironkova isn’t playing like she’s been away from the sport for three years. Pironkova — who stepped away from tennis in 2017 to start a family — showed her skills are still sharp with a won over Alizé Cornet on Monday.

Pironkova, needed three sets to take down Cornet. Pironkova looked strong early, taking the first set 6-4. Cornet charged back in the second set, however, taking the game to a third set. Pironkova came away victorious in the final set, winning 6-3.

The Bulgarian  will look to continue her comeback with a quarterfinals match against Serena Williams. Pironkova lost her only two matches against Williams, but the two haven’t played each other since 2015.

DISCLAIMER: The Views, Comments, Opinions, Contributions and Statements made by Readers and Contributors on this platform do not necessarily represent the views or policy of Multimedia Group Limited.
Tags:
Dominic Thiem
Serena Williams
US Open
US Open 2020