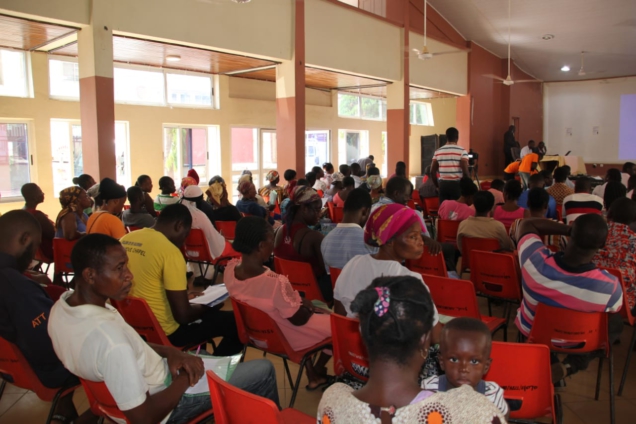 Vaccination of birds against Avian Influenza (AI) remains a valuable tool if used wisely under a properly formulated policy.

That’s according to Dr. Stephen Adejoro, former Director of Research at Zartech Ltd Nigeria and Founder of the Livestock Industry Foundation for Africa (LIFA).

“Avian Influenza has come to stay with us like New Castle disease, Marek disease, Gumboro disease, and several other diseases that are now being vaccinated by our farmers to stabilize their investment,” he observed.

The World Bank Fellowship LSIPT (World Bank & CIRAD) dismisses claims that vaccination is the initial cause of AI and that compensation for the destruction of affected birds may not be sustainable in a monolithic resource economy.

Dr. Adejoro recommends heavy funding of research institutes for fast and easy diagnosis of AI Stereotype and the manufacturing of such vaccines in each country.

He was speaking to farmers in Ghana about a knowledge update on poultry health and nutrition dubbed ‘Bird Flu – A Need To Reverse Solo Strategy Stamping Out With Compensation by Developing Countries’.

Dr. Adejoro indicates that it is no more ethical to exclude vaccination from the proactive management of Avian Influenza especially in developing countries where economies cannot support stamp out and compensation.

Citing the Office International Des Epizooties, recently known as World Animal Health Organisation, Dr Adejoro states that unfolding development points towards a policy shift from a solo strategy of stamping out to a mixed strategy that emphasize prevention by a synergy of emergency depopulation and prophylactic vaccination.

He also recommends that a category of poultry investors exempted from the new government compensatory policy should be allowed to adopt a mixed prophylactics biosecurity, education, insurance, and vaccination strategies.

“Such vaccines must be approved by the veterinary department, Ministry of Agriculture prior to any importation and notification of such approval must be a part of the import policy,” he added.

For countries like Ghana to prevent the further fast spread of Avian Influenza, Dr. Adejoro explains that marginal risky region(s) should be allowed to practice ring vaccination immediately if an outbreak is announced in the area.

“There is a need for a national AI risk map for countries to be updated regularly,” he said.

The knowledge-sharing project began in Nigeria, then expanded to The Gambia, Cote D’Ivoire, Benin, Liberia, and Ghana.

Though Dr. Adejoro and his team are not mounting pressure on governments of any of the countries where training sessions were held, they are persuading them to reconsider AI vaccination.

Avian Influenza is a highly contagious viral disease that affects both domestic and wild birds.

It is a devastating viral disease of poultry with zoonotic implications on human health. The disease attacks respiratory systems such as the nose, throat and lungs.

The sporadic spread of the virus has been attributed to migratory birds and mechanical vectors that could be carrying the virus asymptomatically.

The outbreak spread rapidly across many countries where scientists believe that infected migratory birds spread infections as they spent the winter in the tropics. Migratory waterfowl aid in the early detection of threats to poultry and, potentially, human health.

According to the Ministry of Food and Agriculture website, the first AI outbreak was reported in Ghana in April 2007 on a farm at Kakasunanka, near Michel Camp in the Tema Metropolis. This was followed by outbreaks in Sunyani’s New Dormaa in the Bono region and Aflao in the Volta region.

AI outbreaks were reported in June 2018 at Bonkra and Atia in the Ashanti region, as well as Nkawkaw in the Eastern region, affecting 12,175 birds.

In 2021, the regional breakdown on the spread of the disease in the country indicated a total of 10 regions out of 16 had recorded cases of AI.

In all, 703, 966 bird mortality was recorded in the affected regions. 555, 227 birds had to be destroyed as part of containment measures by the Ministry.

The remaining 143, 406 deaths were as a result of HPAI infections. 159 farms were affected across the country.

Interventions to fight AI in Ghana

The Ghanaian government approved the release of an emergency budget support of approximately GHC44 million to the Ministry of Food and Agriculture earlier this year.

The government also approved the immediate recruitment and deployment of 550 veterinary professionals out of a total of 1100 professionals, as well as the purchase of vehicles, motorcycles, and laboratory equipment to ensure the smooth operation of the Veterinary Services Directorate.

According to the Ministry of Food and Agriculture, the government released GHC20,105,718.03 for stamping out, decontamination, and disposal materials, compensation to impacted farmers, communication strategy and some outstanding compensation from 2015-2018.

“Following the release of part of the approved funds, it was observed that between July and December 2021, the number of farms and birds affected have doubled. As at October 2021 when the Cabinet memo was approved 261,000 birds, 1,243 bags of feed, and 1,447 crates of eggs had been destroyed as a result of the disease,” the Minister of Food and Agriculture, Dr. Owusu Afriyie Akoto Osei has said in a press briefing communicating various measures put in place regarding the outbreak of the Highly Pathogenic Avian Influenza (Bird Flu) in 2021.

The minister said, by 31st December 2021, which was used as the cut-off point for the payment of the compensation, the total number of birds affected by the Bird Flu was 554,638. The amount of feed destroyed had increased to 1,701.5 bags, with 2,548 crates of eggs affected.

“This situation depicts an increased number of birds, quantity of feed and crates of eggs destroyed. To ensure all affected farmers from July to December 31st, 2021 receive some compensation for any losses incurred as a result of the outbreak, the Ministry has agreed to pay GHC30.00 for a matured bird, GHC20.00 for a pullet, GHC10.00 per chick, GHC80.00 for a bag of feed and GHC10.00 for a crate of egg based on the amount available immediately,” he said.

Copy of the statement published on the ministry website also indicates that the Ministry received the requisite data on the number of farms that were affected during the outbreaks of 2016, 2017 and 2018.

“An outstanding Thirty-Six (36) poultry farms will also receive their compensation. Those who have experienced outbreaks in the year 2022 throughout the country have also been captured in the database of the Ministry and will be subsequently in consultation with the Ministry of Finance be taken care of. Affected poultry farmers between July – December 31st 2021, should collect their certificates of destruction from the VSD and submit to the Finance and Administration Unit of MoFA for commencement of payments,” said the statement.

Importance of Biosecurity on farms

The ministry reminded farmers, as Dr. Adejoro did in his address, to strengthen biosecurity measures on farms and to avoid restocking farms until biosecurity certification and management practices are certified by the Veterinary Services Directorate and Animal Production Directorate.

“Also a biometric registration and certification of all poultry farms in the country currently is ongoing. I urge all farmers to lend themselves to the biometric processes so they can be captured in the comprehensive database of poultry farmers in the country. This is all part of modernizing poultry farming in the country and enhancing the accuracy of data for planning, targeting for support and payment of compensations when the need arises in the future.”

He explains that once they have identified the circulation strains, they will be able to ask vaccine manufacturers to potentially submit samples of available vaccines to the FDA for analysis.

“That’s the best way to import the right vaccine to curb the challenge,” he said.

The zoonotic nature of the disease calls for public alert from the sub-Region and vigilance to mitigate the possible impact on the poultry industry and public health in general.

That is why Nigerian-based NGO, LIFA, has decided to train about 400 farmers in Kumasi and Asante Mampong in the Ashanti region who are expected to go back to the drawing board and do whatever is expected of them.

A beneficiary of the training, a retired veterinarian and farmer, Bertha Adizatu Debrah, says the training has exposed her to the issue of vaccination and urges the governments to take a second look at suggestions.

According to her, many poultry farmers are going out of business due to the AI.

“It discourages young people who want to go into farming,” she said.

Bertha is not alone; several other farmers who attended the training offered similar advice.

For instance, Gifty Esinam Hiatorpe, a midwife from Ejisu who started domestic farming in 2019, says she made numerous mistakes in her attempt to produce local products for her family and the general public. However, the training will have an impact on her.

She is optimistic about turning the table around.

DISCLAIMER: The Views, Comments, Opinions, Contributions and Statements made by Readers and Contributors on this platform do not necessarily represent the views or policy of Multimedia Group Limited.
Tags:
Avian Influenza
Vaccination