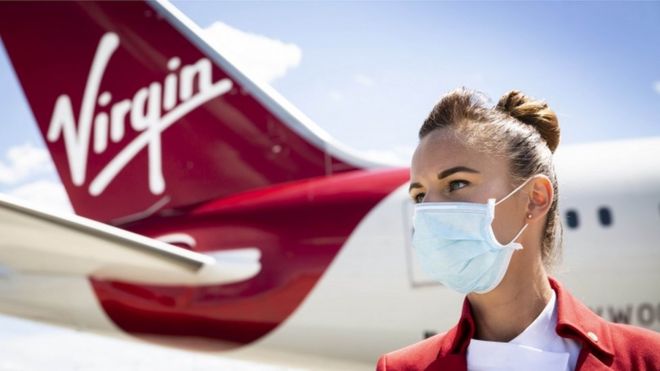 Virgin Atlantic is awaiting the outcome of a key vote on a restructuring plan which is seen as vital to secure its future beyond the coronavirus crisis.

BBC News – Virgin Atlantic awaits key vote on survival deal https://t.co/XeplcT8Xm9 . March ” Virgin days before collapse”. April “Give us £500M, May “Company will fold at the end of this month unless cash found. NOW the latest ” Run out of cash at the end of September”.

The airline agreed the £1.2bn rescue deal in July, but this has to be agreed by creditors.

The firm is “fundamentally sound” but a restructuring and fresh cash injection is critical, its lawyers have said.

It has warned that it could run out of cash by the end of September if the plan is not approved.

The deal involves £400m in new cash, half of which will come from its main shareholder, Sir Richard Branson’s Virgin Group.

The rest will come from investors and creditors, who now have to give their approval in Tuesday’s High Court hearing.

Like other airlines, Virgin Atlantic’s finances have been hit hard by the collapse in air travel due to the pandemic.

It is cutting 3,500 staff, but the airline has said the remaining 6,500 jobs should be secure.

Robert Boyle, a former director of strategy at British Airways owner IAG who now runs his own aviation consultancy, told the BBC that for the deal to go ahead, Virgin Atlantic’s unsecured creditors had to agree for their repayments to be rescheduled.

He said they were being asked to accept 20% less than they were owed, with the rest to be repaid over two years.

Mr Boyle said the extra cash “doesn’t seem like enough to me”, given that Sir Richard had asked the government for £500m and had his request rejected.

“It will get them through maybe the next six months, when they might be in a better position to ask for more money from somewhere,” he added.

Apart from Virgin Group, Virgin Atlantic’s other main shareholder is US airline Delta, which owns 49% of the airline.

However, Mr Boyle said Delta was unable to invest in foreign firms because of conditions imposed when it received a $5.4bn (£4.1bn) bailout from the US government in April.

Sir Richard Branson’s Virgin Atlantic could run out of cash next month if creditors do not approve a £1.2bn rescue deal, a UK court has heard.

The airline is “fundamentally sound” but a restructuring and fresh injection of money is critical to securing its future, Virgin’s lawyers said.

The plans need approval from creditors under a court-sanctioned process.

As part of that process Virgin Atlantic is also seeking protection under chapter 15 of the US bankruptcy code.

That enables a foreign debtor to shield assets in the country.

Like other airlines, Virgin Atlantic’s finances have been hit hard by the collapse in air travel due to the pandemic.

Last month, the company agreed a rescue deal worth £1.2bn ($1.6bn) to secure its future beyond the coronavirus crisis.

The court in London heard that the airline’s cash flow would drop to “critical levels” by the middle of next month and it would “run out of money altogether” by the week beginning 28 September.

David Allison QC, for Virgin Atlantic, told Mr Justice Trower in written submissions that the group had “a fundamentally sound business model which was not in any problems at all before the Covid-19 pandemic”.

“Passenger demand has plummeted to a level that would, until recently, have been unthinkable,” he said. “As a result of the Covid-19 pandemic, the group is now undergoing a liquidity crisis.”

Mr Allison said that without a “solvent recapitalisation”, including an injection of new money, Virgin Atlantic’s directors would have “no choice” but to place the company into administration in mid-September 2020 in order to wind down the business and sell any assets, where possible.

He said the restructuring needed to be sanctioned by early September. Mr Justice Trower gave the go-ahead for a meeting of creditors on 25 August.

In a related procedural move, Virgin Atlantic filed for US bankruptcy protection, saying it had negotiated a deal with stakeholders “for a consensual recapitalization” that will get debt off its balance sheet and “immediately position it for sustainable long-term growth”.

Virgin Atlantic said in a statement on Wednesday that it continues to operate its limited flight schedule, adding: “With support already secured from the majority of stakeholders, it’s expected that the Restructuring Plan and recapitalisation will come into effect in September. We remain confident in the plan.”

Under the airline’s restructuring plan, Sir Richard’s Virgin Group will inject £200m, with additional funds provided by investors and creditors.

The billionaire Virgin boss had a request for UK government money rejected, leaving the airline in a race against time to secure new investment.

In May, Virgin Atlantic, which is 51% owned by Virgin Group and 49% by US airline Delta, announced that it would cut more than 3,000 jobs in the UK and close its operation at Gatwick airport.

Meanwhile, Virgin Australia’s new owner, the US private equity group Bain Capital, said it will cut 3,000 jobs, which is about a third of the airline’s employees.

“Working with Bain Capital, we will accelerate our plan to deliver a strong future in a challenging domestic and global aviation market,” Virgin Australia’s chief executive Paul Scurrah said.

The following month it was bought by Bain Capital, which said it supported the airline’s current management team and its turnaround plan for the business.

Bain also promised a “significant injection of capital” that would help Virgin Australia recapitalise and retain thousands of jobs.

Carriers around the world are struggling as they deal with the severe plunge in air travel caused by the coronavirus pandemic.

The International Air Transport Association warned in June that the slump will drive airline losses of more than $84bn (£64bn) this year.

DISCLAIMER: The Views, Comments, Opinions, Contributions and Statements made by Readers and Contributors on this platform do not necessarily represent the views or policy of Multimedia Group Limited.
Tags:
British Airways
Coronavirus
The International Air Transport Association
Virgin Atlantic