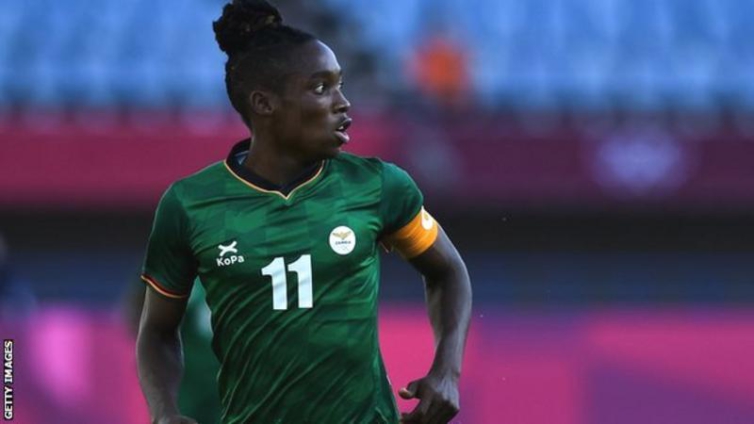 Zambia captain Barbra Banda has been ruled out of the Women’s Africa Cup of Nations (WAFCON) after failing gender eligibility tests.

Despite being allowed to play in last year’s Olympic Games, the 22-year-old forward has failed to meet the criteria required by global governing body Fifa, whose gender rules the Confederation of African Football (Caf) defers to regarding WAFCON.

“All the players had to undergo gender verification, a Caf requirement, and unfortunately she did not meet the criteria set by Caf,” Andrew Kamanga, the president of Zambia’s FA (Faz), told BBC Sport Africa.

“It’s unfortunate that we find ourselves going into the tournament without our best players.”

Zambia opened their Group C campaign with a 0-0 draw against three-time runners-up Cameroon on Sunday and face Tunisia on Wednesday prior to finishing the group with a clash against debutants Togo at the weekend.

When asked by BBC Sport Africa on Sunday how it was possible for Banda to have played in the Olympics but not at WAFCON, Caf’s communications director Lux September responded by saying “there is no such decision from the Caf medical committee”.

The answer has irritated Kamanga however, who has told BBC Sport Africa that “whatever happened was purely a Caf requirement”.

Banda – who was pulled from the squad by Faz after she failed the verification on the eve of the finals – is one of the most prolific strikers in African women’s football and is currently in Morocco and training with the Copper Queens squad, despite being unable to play.

“Everybody at home [in Zambia] has been made to believe that Faz did nothing and decided on their own to exclude the player,” Kamanga added.

“We the federations are compelled to undertake the tests and then we pass on the information to Caf, and Caf, equally, test the players if needs be in the tournament.

“So it will be unfair to turn around and say Caf is not part and parcel of whatever has transpired.”

BBC Sport Africa understands that three other Zambian players were affected by gender eligibility but chose not to feature for the national team, whose squad features 22, rather than the permitted 26, players.

Banda was originally named in Zambia’s WAFCON squad after taking medication to help reduce her levels of testosterone, which are naturally overly-high, but she has still not met the regulations, BBC Sport Africa understands.

The forward is contracted to Chinese side Shanghai Shengli but is reported to be on the verge of a possible move to Spain’s top flight.

Gender verification is not new to sport, nor is the fierce debate that accompanies it.

Multiple Olympic athletics star Caster Semenya of South Africa has been in a battle with World Athletics for many years in a bid to challenge its gender eligibility rules.

She is currently awaiting a verdict in her case from the European Court of Human Rights after previously losing appeals at the Court of Arbitration for Sport and Switzerland’s Federal Supreme Court.

In football, Fifa’s eligibility rules – which the 2022 Women’s Nations Cup defers to – were put in place over a decade ago, in May 2011.

According to the Fifa document, the rules were introduced to ensure a level playing field and “safeguard2 the separation between male and female players.

“Androgenic hormones have performance-enhancing effects which may provide an advantage in football,” the Fifa document states.

As a result, the amount of naturally-occurring testosterone in female players is limited to certain levels, with players who are over those levels needing to reduce them through medication (or, in extreme cases, surgery) before they can be passed eligible to play.

Faz says it is concerned at the implementation of the rules set by Fifa, which oversees Olympic football events among countless other tournaments.

“Barbra carried the team on her shoulders during the qualifiers for the Olympics, as well as the tournament itself,” Kamanga explained.

“She’s done a good job, but we also need to now address this issue, which seems to have technically taken her out of the tournament.

“The elephant in the room is to deal with this issue of gender verification, which seems to be discriminatory, in the sense that you seem to have it in this competition [but not others].

“But these are professional players, who are also playing professional football in different leagues, where that requirement doesn’t seem to be in tandem with what Caf is asking.

“Equally, if you take it to the next level in the Fifa competitions, you now start questioning why it should only be enforced in this competition, when it should really cut across all competitions. I think this is where we seem to be at cross purposes.”

Having faced criticism for travelling with a player who they knew would not meet the set criteria, Kamanga explained that they travelled with Banda in the hope that her testosterone-reducing medication could have enabled her to play.

“The medical team recommended she be given an opportunity without being dropped outright and she was still given that opportunity up to the last minute when the final team was announced,” the Faz president explained.

“But most importantly, she’s the captain of the team and she’s equally important for team-building and ensuring spirit in the team.”