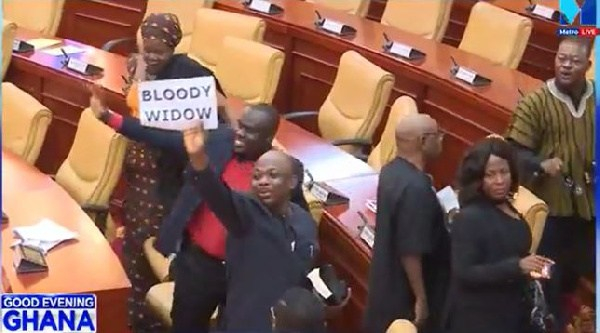 Opposition MPs who characterised a new entrant as a “bloody widow” cannot be identified for possible punishment after the description was deemed distasteful and insensitive.

The Office of the Clerk of Parliament says despite viewing the footage in Parliament on that day, it could not identify the MPs who held the placards with the boldly written inscription “bloody widow” during a swearing-in ceremony.

That term was targeted at Lydia Alhassan said to be the widow of New Patriotic Party (NPP) MP for Ayawaso West Wuogon Emmanuel Agarko who died November 2018.

There were bloody scenes in the ensuing by-election on 31st January 2019 during which at least 15 persons were hospitalised. She was declared winner after the National Democratic Congress (NDC), the party of her main rival, pulled out of the two-horse race.

But feeling hard done in the polls, the NDC boycotted her swearing-in on Febuary 6, 2019 citing the bloody circumstances surrounding her victory as another sign of insecurity under the Akufo-Addo government.

The NDC placards however attracted backlash from sections of the public and on social media.

The Deputy Speaker of Parliament Joe Owusu sitting in for Prof. Mike Oquaye ordered invesitgations into the incident for the particular MPs to be hauled before the Privileges committee of Parliament. This was after the Minority leadership refused to apologise for the ct.

In an astonishing claim, the Office of the Clerk of Parliament have found the footage unable to depict the MPs showing the ‘distasteful’ placards.

Supporting this claim, the Deputy Majority leader Adwoa Safo said the identification has been impossible. “Indeed they have the tape but the indentfication of the specific members has been a challenge”, she said.

The Dome-Kwabenya MP said Parliament will rely on videos taken by media houses during the swearing-in ceremony.