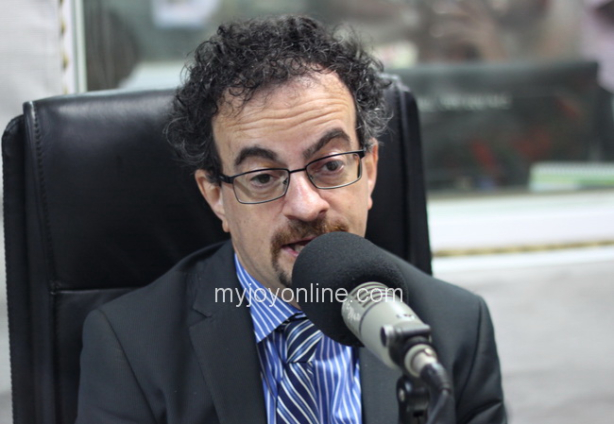 The UK High Commissioner to Ghana, Jon Benjamin, says his outfit has no apologies for correcting a false information put out by the Narcotics Control Board (NACOB) in the wake of a recent drug scandal that has hit the country.

Addressing guests who were celebrating the 10th Anniversary of IMANI Ghana, the Commissioner said it was his responsibility to correct whatever "erroneous information" has been put out about his country, and he did just that.

His comments come in the wake of the arrest of drug suspect Nayele Ametefeh who only Thursday, pleaded guilty to the offence of trafficking drugs.

Shortly after her arrest, Ghana's Narcotics Control Board issued a statement claiming to have collaborated with the UK authorities in the arrest of the suspect.

The UK High Commission in Ghana quickly issued a statement denying the claim.

While admitting that NACOB had played a role under the Operation Westbridge project to arrest some suspected drug dealers in the past, the Commission stated emphatically that NACOB played no role in the arrest of Nayele Ametefeh.

The statement from the Commission has courted some anger amongst some political actors in Ghana.

Some government spokespersons have sought to criticise the statement issued by the Commission.

But Jon Benjamin said he was only doing his job.

"And to those who accused us of interfering in the internal affairs [of Ghana] by issuing a statement about the case, our only statement, I might add, then I am sorry to tell them that we have every right publicly to correct an equally public, prior, erroneous claim about our involvement in this case.

"That is precisely one of  the things that diplomatic missions are there for. We would not expect the Ghana High Commission in  London to stay silent in the face of false information about Ghana in the UK and we will certainly not accuse the Ghana High Commission of supposed interference for making such a correction and we do not accept the allegation against us in this case," he stated.

According to him, attempts were made by some persons, to stop him from honouring the IMANI invitation following the drugs scandal but he resisted.

"I don't run away at the first sign of trouble or leave people in the lurch. The fact is that this invitation was extended to me and I accepted it long before this story. Having made such a commitment, I honour it. I keep my word rather than letting down the people I give it to," he said.

Jon Benjamin said the UK will continue to remain neutral in Ghana's political issues and implored political actors to desist from roping the UK in domestic political point scoring.