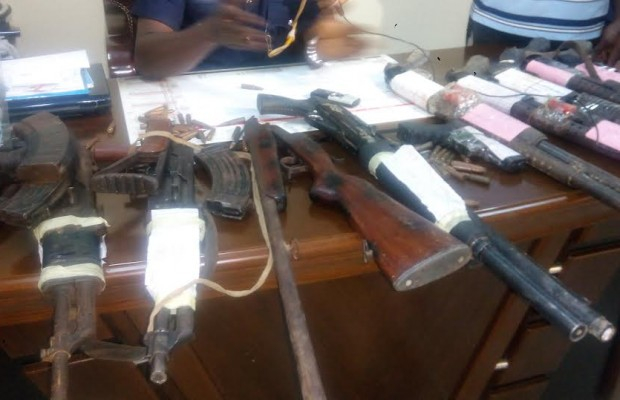 Police in the Western Region have mounted special surveillance across the region after impounding what they say is the largest cache of arms and ammunition in the region.

The guns numbering thirteen were retrieved over a period of three months, police say.

Police say members of a Watchdog Committee played a key role in the operation.

So far, about five suspects have been arrested in connection with the arms seizure. Some of them have been jailed while others are currently before the court.

DCOP Quainoo, said his Command has intensified the search for illegal arms and ammunition in the region because of the upcoming election.

He disclosed that on September 28, 2015, some workers of Millicom Ghana Limited, operators of Tigo mobile telecommunication network, went to weed around one of their masts located in a bush at Wassa Akropong and in the course of the work they came across two pump action guns.

The workers quickly alerted the police who went to the scene to retrieve the weapons. The regional commander suspected that the guns might have been used by some robbers.

He mentioned that though no one had been arrested in connection with those weapons, he believed that the retrieval would thwart the plot of the robbers who might have deposited them in that bush for a planned robbery attack.

The Regional Commander added that the police in Wassa Akropong also retrieved two pump action guns from a robbery scene at a galamsey site after the peace officers had information that suspected armed robbers were attacking people at the site.

He pointed out that by the time the police got to the site, the armed robbers had absconded but left the weapons there, which they (police) took and sent to the police station.

He added that the police in the area also retrieved a pump action gun and a pistol from a suspected robber at Akropong.

Later, someone who heard the story went to the police station and identified the pump action gun as his, which was robbed from him at a galamsey site.

“The police have not released the weapon to the claimant because investigations are continuing,” DCOP Quainoo said.

He indicated that the vigilance of the members of the Watchdog Committee at Asankabreman near Asankragwaa had also led to the retrieval of four pistols from a resident in the area, one Abubakar Alari, now at large.