What happens to shareholders, employees of UT Bank and Capital Bank? - MyJoyOnline.com

What happens to shareholders, employees of UT Bank and Capital Bank? 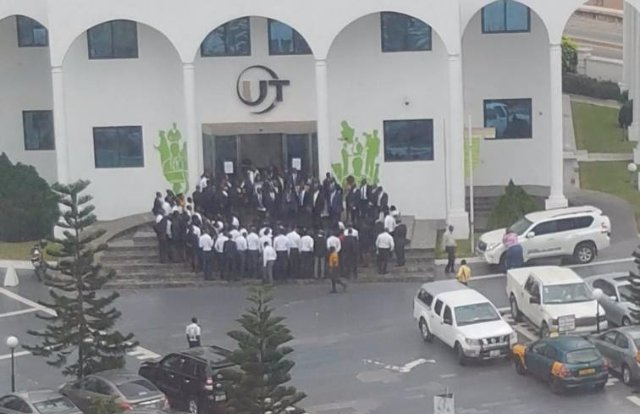 The breaking news that shocked the banking system on Monday 14 August 2017 has left a lot of questions on the minds of many and I ask what happens to the employees and the shareholders of these two collapsed banks?

As many in the public are really worried and uncertain about the effects of the collapse of UT and Capital bank on depositor’s funds, I want to assure all depositors and customers of these two failed banks that their funds are safe and GCB bank is very capable and resourceful to continue to provide them with the best of service.

This seeks to share some ideas as to what may happen to the shareholders and the employees of these two collapsed banks and make some useful recommendations as to how the issue must be handled.

EFFECTS ON THE EMPLOYEES

The collapse of the two banks may have an adverse effect on the employees. The situation would have been different if the transaction was a merger or acquisition by GCB bank. The writer wishes to discuss and share some opinion on reasons why there would be job losses in this kind of transaction.

• GCB bank has wide branch network across the country and it is very likely that they may have branches in the same locations as these two failed banks. If this is the case, then it wouldn’t make a financial sense to keep operating branches that share proximity with GCB branches.

• The porous nature of the balance sheets of the two banks is likely to be same for some of the Branches if not all of them. With this understanding, one can conclude that most of the Branches were operating at a loss and may face possible closure for reasons of proximity to GCB Bank branches.

• Again, if you look at the staff cost on the financials of these two collapsed banks, it is huge especially that of Capital Bank; reasons being that they poached staff of other banks and gave them competitive packages when they started operation as a universal bank.

• GCB bank may also undertake a staff audit to review the capacity/skill and competence of the staff of the two collapsed banks, and those who qualify may keep their jobs (Your guess is as good as mine for the staff who will not meet the mark) and those who do not may be asked to go home.

EFFECTS ON THE SHAREHOLDERS

The shareholders of the two failed banks are unlikely to receive any funds from the liquidation proceeds since shareholders are mostly ranked behind all debt holders and other related parties to whom the two banks owe money especially the depositors.

The more reason why being a shareholder is highly risky than just holding debt securities like bonds is that in the event of liquidation/insolvency or a collapse, you are the very last in line to be paid.

Again, in the case of UT bank, which was listed on the Stock Exchange, however, the stocks itself will become worthless leaving the shareholders unable to sell their junk share which means a total loss to the shareholders.

The only hope for the shareholders of these two failed banks is when there is money left over after the assets are liquidated and all debts are paid off, the remaining may be paid to them.

• The Bank of Ghana must and should ensure that all the stakeholders and related parties especially the employees of the two failed banks are engaged and measures put in place to compensate duly all the staff who may be retrenched in the process.

• The Bank of Ghana and GCB bank must and should follow due processes and ensure due diligence in all its investigations not to witch-hunt anyone in the process. This would take care of the risk of all public agitations and discussions.

In the wake of all these happenings, the regulator BoG and all the stakeholders including banking associations, the government, and the public should get more involved in matters that affect the growth and progress of our country. We should collectively stand with the affected people and offer support in any way we can for the sake of humanity.

©Jerry.J.AFOLABI is a financial & Economic expert who believes that ordinary people can do extraordinary things when given opportunity. He is a Change Maker with the ability of easily getting people to get things done for the good of humanity.Email;jelilius@gmail.com/0541238987