But it isn't magic. It's Brenda, a 26-year-old single mother who lives Kibera, Africa's largest slum, and perhaps the toughest neighbourhood on earth, where hundreds of thousands of people live in a space not too much bigger than London's Hyde Park.

Each day, Brenda leaves her home here to catch a bus to the east side of Nairobi where she, along with more than 1,000 colleagues in the same building, work hard on a side of artificial intelligence we hear little about – and see even less.

In her eight-hour shift, she creates training data. Information – images, most often – prepared in a way that computers can understand. 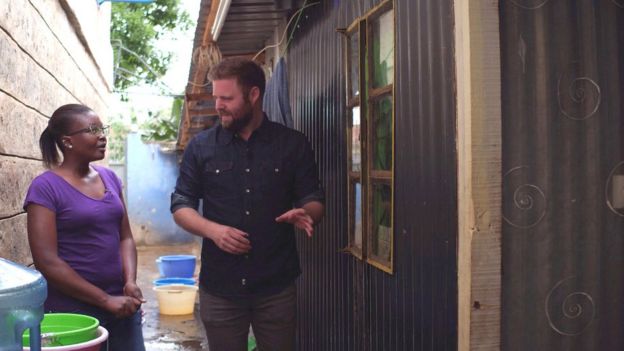 Brenda loads up an image, and then uses the mouse to trace around just about everything. People, cars, road signs, lane markings – even the sky, specifying whether it's cloudy or bright. Ingesting millions of these images into an artificial intelligence system means a self-driving car, to use one example, can begin to "recognise" those objects in the real world. The more data, the supposedly smarter the machine.

She and her colleagues sit close – often too close – to their monitors, zooming in on the images to make sure not a single pixel is tagged incorrectly. Their work will be checked by a superior, who will send it back if it's not up to scratch. For the fastest, most accurate trainers, the honour of having your name up on one of the many TV screens around the office. And the most popular perk of all: shopping vouchers.

"You get to do something unique," Brenda told me when I visited the tiny home she shares with her daughter, brother and mother.

"With my work that I'm doing, I believe I'm working for something that is going to help someone in future."

Brenda does this work for Samasource, a San Francisco-based company that counts Google, Microsoft, Salesforce and Yahoo among its clients. Most of these firms don't like to discuss the exact nature of their work with Samasource – as it is often for future projects – but it can be said that the information prepared here forms a crucial part of some of Silicon Valley's biggest and most famous efforts in AI. 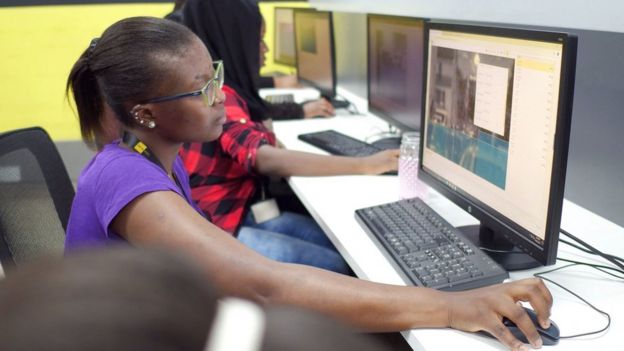 It's the kind of technological progress that will likely never be felt in a place like Kibera. As Africa's largest slum, it has more pressing problems to solve, such as a lack of reliable clean water, and a well-known sanitation crisis.

But that's not to say artificial intelligence can't have a positive impact here. We drove to one of Kibera's few permanent buildings, found near a railway line that, on this rainy day, looked thoroughly decommissioned by mud, but has apparently been in regular use since its colonial inception.

Almost exactly a year ago, this building was the dividing line between stone-throwing rioters and the military. Today, it's a thriving hub of activity: a media school and studio, something of a cafeteria, and on the first floor, a room full of PCs. Here, Gideon Ngeno teaches around 25 students the basics of using a personal computer.

What's curious about this process is that digital literacy is high, even in Kibera, where smartphones are common and every other shop is selling chargers and accessories, which people buy using the mobile money system MPesa. 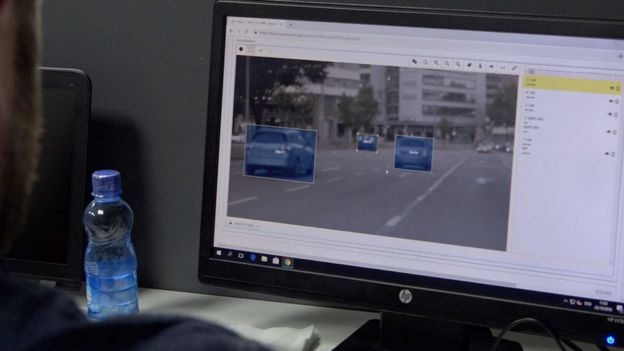 Image captionImages have to be painstakingly annotated – cars, roads, signs… even the sky

But much of Africa has leapfrogged the desktop PC era. The keyboard and mouse combination is a foreign, cumbersome experience. One Samasource team member told me how she'd often observe trainees look away from their PCs and pick up their phone when asked to search for information on the internet.

The course taught here is designed specifically for those wanting to go on to work at Samasource or another digital economy company. It costs 500 Kenyan shillings – around $5. That's a not insignificant amount for people who often live below the poverty line. The company used to offer the course for free, but without the financial commitment, I was told attendance (and concentration) was sketchy at best.

Now the biggest challenge, Ngeno said, was noise – as we spoke, a group of eager children did exactly what you'd expect of them when handed a selection of musical instruments. Outside, a market thronged with activity.

A campus fit for California

In contrast, the Samasource office is in a part of Nairobi that reassures you this is a city on the up. The company occupies four floors of a business park building, with vast banks of computers being used for the job of training data. 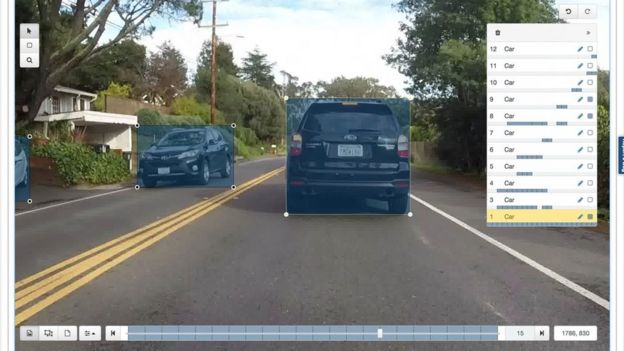 If you didn't look out of the windows, you might think you were at a Silicon Valley tech firm. Walls are covered in corrugated iron in a way that would be considered achingly trendy in California, but here serve as a reminder of the environment many of the workers come from: around 75% are from the slum.

Most impressively, Samasource has overcome a problem that most Silicon Valley firms are famously grappling with. Just over half of their workforce is made up of women, a remarkable feat in a country where starting a family more often than not rules out a career for the mother. Here, a lactation room, up to 90 days maternity leave, and flexibility around shift patterns makes the firm a stand-out example of inclusivity not just in Kenya, but globally.

"Like a lot of people say, if you have a man in the workplace, he'll support his family," said Hellen Savala, who runs human resources.

"[But] if you have a woman in the workplace, she'll support her family, and the extended family. So you'll have a lot more impact."

'It would never work'

That balance isn't just among those doing the entry level work, either. In San Francisco's Mission District, in an office far more modest than what the firm has in Kenya, Samasource's chief executive Leila Janah beamed when talking about how the firm's management team is majority female.

"It's extremely unusual in Silicon Valley more broadly, but especially within artificial intelligence.

"We just think of it as normal. It's a competitive advantage." 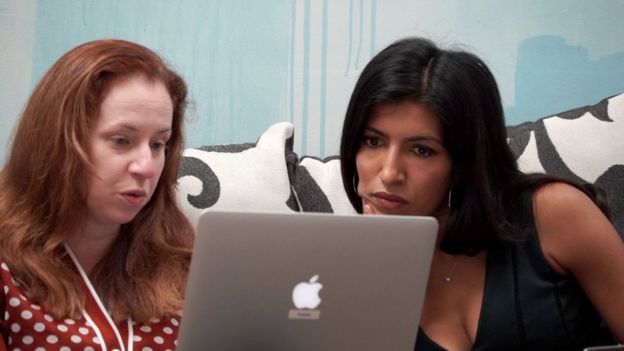 Image captionLeila Janeh, right, was at first criticised for wanting to outsource jobs away from the US

Founded in 2008, Samasource received a frosty reception in its early days. In recession-hit America, outsourcing a large number of jobs to the developing world was not seen as a welcome idea. It arguably still isn't.

Those who did like the concept worried there were too few people with the digital skills necessary to do the work to a standard the tech giants would accept.

"Very smart people in the tech world, and in the world of big philanthropy said this was a wonderful idea, but that it would never work," Janah recalled. Today, Samasource is the largest organisation of its kind in East Africa, and also has facilities in Asia and North America.

Janah touts the company's record for accuracy and security as the major reasons why Google et al come to them for this work. But of course, there's an obvious motivation for these companies to use workers in parts of the world where wages are rock bottom, and where locals are desperate for steady work.

Samasource targets those currently earning around $2 a day, or less, in the so-called informal economy of odd – or dangerous – jobs. Samasource instead provides a living wage of around $9 a day. That's an improvement, but still a pittance for Silicon Valley. 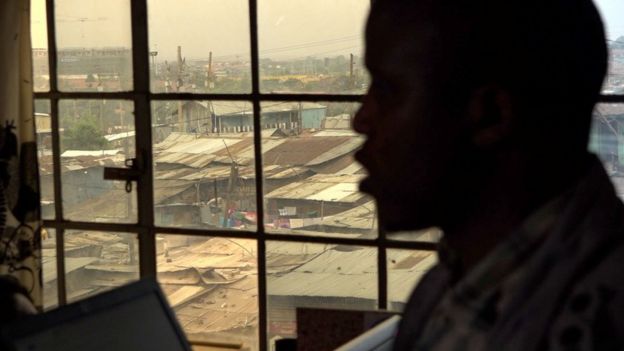 "Yes, it's cost effective," Janah said. "But one thing that's critical in our line of work is to not pay wages that would distort local labour markets. If we were to pay people substantially more than that, we would throw everything off. That would have a potentially negative impact on the cost of housing, the cost of food in the communities in which our workers thrive."

Then of course, there's a question of what happens if the work is no longer needed. Samasource's main business is, after all, in providing data for automated systems. What if the process of creating that data becomes automated as well?

"That's the billion dollar technology question that everyone is paranoid about," Janah said.

"I think there's a lot of hype around that. But if you actually talk to data scientists, the minds behind these algorithms, you'll find the machine is much further behind than most people realise.

"We're going to need training data for a long time."

'It has changed my everything'

Being a data training expect is boring, repetitive, never-ending work. And when not in front of our cameras, some staff talked about how they faced pressure to work quickly in order to hit company targets, leading to fewer breaks. Some Samasource workers are freelancers who can work anywhere, but with a webcam watching them as they work. 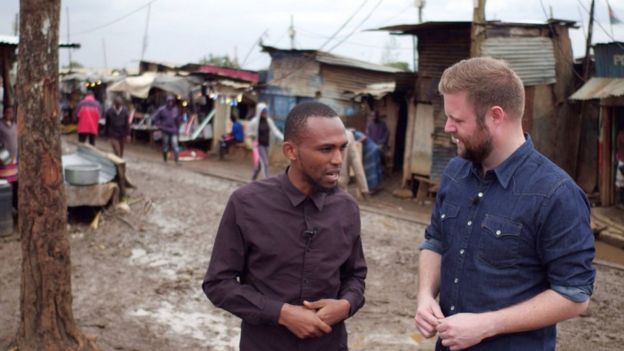 Image captionIdris lived in the slum, but has since been able to move, and has plans to take a business leadership course

None of the staff we saw at the office had any kind of acceptable ergonomic support, often crouching over, clicking away furiously, for hours on end – a certain strain to eyes and body. The company has said it would work on that.

Complaints about the work – which are certainly not unique in this industry – are quickly followed up with stories of changed lives.

Samasource believes it has impacted almost 50,000 people in the developing world; those who either worked at Samasource, or are supported by someone who did. It has surveyed former employees and discovered that around 84% continued on to more formal work or took up higher education.

One of those workers moving onto bigger things is Idris Abdi, 25, who was able to move out of the slum.

"It has changed my… my everything," he said.

"It has changed my perspective, it has exposed me to see there is hope beyond living here."