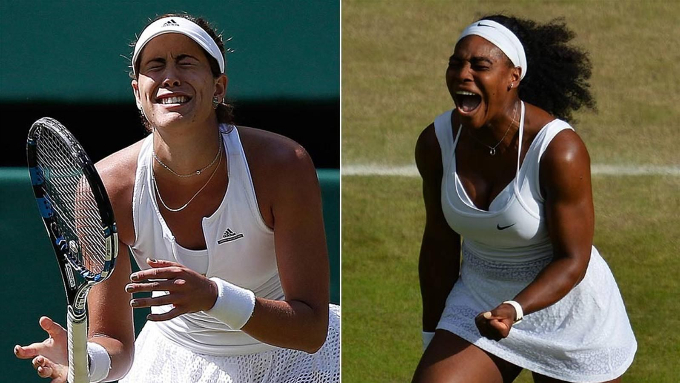 Garbine Muguruza is quietly confident as she prepares to face Serena Williams in Saturday's Wimbledon final.

WHEN THE WOMEN'S FINAL STARTS

In Ghana, SuperSport channel 203 will be showing it live.

"Every time I step out on court, the practice court, the match court, I do look at it as a more fun time because it's not as much stressful as it was. Like getting to 18 was super stressful for me. It was fun, but I was so stressed out."

WHY MUGURUZA INSISTS SERENA IS BEATABLE

A fresh-faced Spaniard who has a love-hate relationship with grass will be eager to prove in the Wimbledon final that the mighty Serena Williams is as human as the next person with blood, and not ice, pumping through her veins.

'Nerves' and 'Williams' are words that are not usually linked such has been the total dominance of the world number one who is gunning for her fourth successive grand slam title to complete the "Serena Slam" for the second time in her career.

But 21-year-old Garbine Muguruza has already proved that she has the power and intelligence to reduce the all-conquering American to a nervous wreck when she subjected Williams to a 6-2 6-2 pummelling at last year's French Open.

"It (the Roland Garros win) is really important because it makes you see and realise that she's also a person. She also has feelings. She also gets nervous," Muguruza said on the eve of her maiden grand slam final when she will be bidding to become the first Spanish woman in 21 years to win Wimbledon.

"She knows that I can win against her, that I'm not afraid. I don't think she's really used to this."