Woman arrested for sabbing a lizard 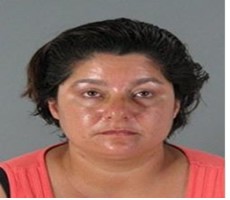 Police arrested a San Carlos woman who allegedly stabbed a bearded dragon lizard during an argument with the pet’s owner, according to the San Mateo County Sheriff’s Office.

After receiving a report of a domestic dispute, police responded to the 1000 block of Crestview Drive around 3:40 a.m. They found a man, who told police that 37-year-old Shawna Kim Apour stabbed his pet lizard during a fight, Lt. Ray Lunny said.

The two had a prior relationship, but they were not married, he said. The victim, who was not injured, told police Apour had left the home on foot.

Police were able to find Apour a short distance from the house, but when they approached her, she brandished a knife, Lunny said.

She refused to put down the weapon and threatened deputies, who used a stun gun to disarm her, he said.

Apour was booked into San Mateo County Jail on suspicion of domestic violence, cruelty to animals, vandalism and brandishing a weapon.

The 14-year-old bearded dragon was taken to a veterinarian, where it received stitches and is expected to survive, Lunny said.

On Tuesday, deputies responded to a call of a suspicious person walking through traffic around 6:50 p.m. Apour, who had been released on bail, was found walking on the railroad tracks near the San Carlos train station, he said.

After additional units arrived, she was arrested on suspicion of attempting to disarm a deputy, trespassing, resisting arrest and committing a felony while out on bail.